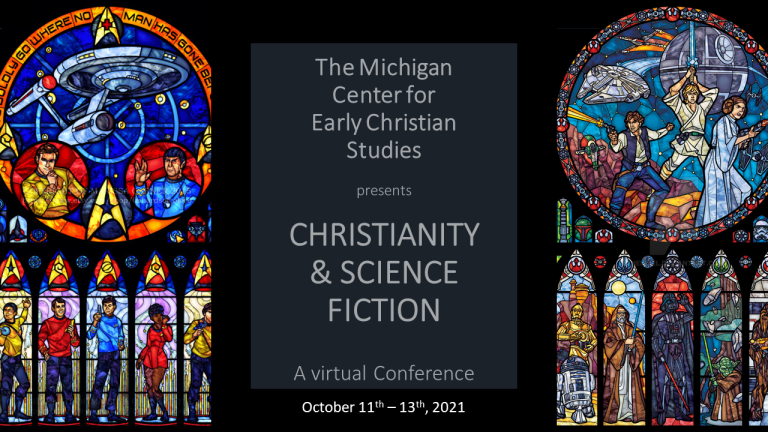 Calendar of conferences on Christianity and science fiction

The Christianity and Science Fiction Conference website is back up and running, thankfully! Here are the details for blog readers, for your convenience:

The Michigan Center for Early Christian Studies, in partnership with the Department of Middle East Studies (University of Michigan), is pleased to announce a four-day virtual conference that explores the symbiotic relationship between Christianity and science fiction. The meeting is chaired by James McGrath, Gabriele Boccaccini, Jason von Ehrenkrook, Deborah Forger and Joshua Scott.

“Christianity and Science Fiction” is the first lecture in a new series sponsored by the Michigan Center for Early Christian Studies. Part of the mission of MCECS is to foster understanding of the legacy of the Christian tradition in its impact on contemporary culture. The keynote speaker and academic presenters at the conference will each offer insight into how the relationship between Christianity and science fiction emerges from a particular vantage point, or at a particular instance of intersection. Christianity is not a single entity with a unified perspective, and neither is science fiction. Studying the interaction between the two provides a better understanding of both and the roles they play in contemporary society.

Registration is free. Please consider supporting the work of MCECS with a donation.

Register for the event here: https://tinyurl.com/cfzkd72c

20min: “I see a series of armors around the world”: the techno-idolatry of Tony Stark
Jason Eberl (Saint-Louis University)

20min: Ritual on the edge of reality: language and creation of the world in Amatka by Karin Tidbeck
Maria Doerfler (Yale University)

20min: The Virgin is a Cyborg: “Heroes and Saints” by Cherrie Moraga in the role of Chicana Mariophany
Rudy Busto (University of California, Santa Barbara)

4.30 p.m.-4.45 p.m .: Conclusion of the conference
Announcements for next year’s conference on “Christianity and Music”

Speaker: Maurice Broaddus
My spiritual journey as a sci-fi writer

Bio: Maurice Broaddus is an accidental teacher (at Oaks Academy Middle School), an accidental librarian (the head of the school library that is part of the IndyPL shared system) and a determined community organizer (Afrofuturist resident at the Kheprw Institute) . His work has been featured in Magazine of F&SF, Lightspeed Magazine, Beneath Ceaseless Skies, Asimov’s and Uncanny Magazine, some of his stories having been collected in The Voices of Martyrs. His novels include the urban fantasy trilogy, The Knights of Breton Court, the steampunk novel, Pimp My Airship, and the mid-level detective story series, The Usual Suspects. As an editor, he worked on Dark Faith, Fireside Magazine and Apex Magazine. His acting work includes writing for the Marvel Super-Heroes, Leverage, and Firefly RPGs, as well as his consulting work on Watch Dogs 2. Read more about him at MauriceBroaddus.com.

Rudy Busto (University of California, Santa Barbara), The Virgin is a cyborg: “Heroes and Saints” by Cherrie Moraga as Chicana Mariophany

Gabriel McKee (New York University), Utopia and the Kingdom of Heaven in the Legion of Super-Heroes and Miracleman

Maria E. Doerfler, PhD, is Assistant Professor of Late Antiquity in the Department of Religious Studies at Yale University. She is fascinated by stories, both professionally and personally. His most recent book, forthcoming with the University of California Press, discusses the intersection of legal writing and the creation of sacred stories. She is an avid reader of science fiction and speculative fiction in general, and is always amazed that people let her lecture on this subject.

Jason T. Eberl, PhD, is Professor of Ethics and Philosophy of Health Care and Director of the Albert Gnaegi Center for Ethics in Health Care at the University of Saint Louis. His research interests include the philosophy of human nature and its application to problems on the fringes of life; ethical issues related to end-of-life care, genetics and the allocation of health care; and the philosophical thought of Thomas Aquinas. He is the author of Thomistic Principles and Bioethics, The Routledge Guidebook to Aquinas’ Summa Theologiae and The Nature of Human Persons: Metaphysics and Bioethics, as well as the editor of Contemporary Controversies in Catholic Bioethics. In addition, he has edited volumes on philosophical themes in Star Wars, Star Trek, Sons of Anarchy, Battlestar Galactica and the films of Christopher Nolan. He has also written essays for similar volumes on Terminator, Avatar, Harry Potter, The Big Lebowski, The Hunger Games, Stanley Kubrick, JJ Abrams, Metallica, Hamilton, and Westworld.

Juli Gittinger, PhD, is Assistant Professor of South Asian Religions at Georgia College. She obtained her doctorate from McGill University in Montreal with an emphasis on contemporary issues of Hinduism (nationalism, gender, digital media). She holds an MA from the University of Colorado in Boulder and SOAS in London. His personal areas of research are Hindu nationalism and religion in media and popular culture. Recent publications include his second book Personhood in Science Fiction: Religious and Philosophical Considerations (Palgrave 2019) and a co-edited volume on Westworld and Theology (Lexington Press 2020).

Dr. Amanda MacInnis Hackney’s main area of ​​research (University of Toronto – Wycliffe College) focuses on how theologians use and interpret the scriptures in their systematic theologies. In addition to teaching college and seminary theology, method, and ethics, Dr Hackney is co-editor of the upcoming volume Theology and Star Trek, and curator of the Women and Theology Research Database (launched at l ‘fall 2021). Originally from Canada, Dr. Hackney recently moved to northern South Carolina.

Gavin McDowell, PhD, is currently a postdoctoral researcher participating in the project “TEXTEVOLVE: A New Approach to the Evolution of Texts Based on the Manuscripts of the Targums” hosted at KU Leuven. Previously, he was a special regular member at the Institute of Ancient and Medieval Studies at Laval University (Quebec, Canada), where he studied the use of “Old Testament pseudepigrapha” as Christian hagiography. His doctoral thesis, “Sacred History in Late Antiquity,” examined the relationship between the rabbinical work Pirqe de-Rabbi Eliezer and two similar writings, the Book of Jubilees of the Second Temple and the Syriac Cave of Treasures. His main research interest is the reception of biblical, Deuterocanonic and apocryphal literature within Christianity and Judaism.

Paul Levinson, PhD, is Professor of Communication and Media Studies at Fordham University in New York City. His non-fiction books, including The Soft Edge, Digital McLuhan, Realspace, Cellphone, New New Media, McLuhan in an Age of Social Media, and Fake News in Real Context have been translated into 15 languages. His sci-fi novels include The Silk Code (winner of the Locus Award for Best First Sci-Fi Novel of 1999), Borrowed Tides, The Consciousness Plague, The Pixel Eye, The Plot To Save Socrates, Unburning Alexandria and Chronica. His award-winning novel, “The Chronology Protection Case”, has been adapted into a short film and is on Amazon Prime Video. He appears on CBS News, CNN, MSNBC, Fox News, Discovery Channel, National Geographic, History Channel, and NPR. His 1972 album, Twice Upon A Rhyme, was re-released in 2010, and his new album, Welcome Up: Songs of Space and Time, was released in 2020.

Gabriel Mckee is a librarian at the Institute for the Study of the Ancient World at New York University. His research explores the intersection of religion, science fiction, bibliography, and counter-cultures. He is co-editor of the upcoming volume Theology and the DC Universe, and is currently working on a monograph on Fortean author and publisher Gray Barker and his flying saucer press, Saucerian Books.

Roger Sneed, PhD, is the profession of Dorothy and BH Peace, Jr. and chair of the religion department at Furman University, where he has taught since 2007. He teaches African-American religious history and thought, the Christian Ethics, Sexuality, and Christian Theologies, Introduction to Religion, and a host of other courses that address religion, culture, and society. He is a fellow of the American Academy of Religion, where he served as Co-Chair of the Gay Men and Religion Program Unit, a member of the Status of LGBTIQ Persons in the Profession committee, and is currently a member of the AAR program. Committee. Dr. Sneed’s first book, Representations of Homosexuality: Black Liberation Theology and Cultural Criticism, was a critique of representations (and erasures) of homosexuality in liberation theologies and black women as well as in some forms of cultural criticism. black. Her next book, “The Dreamer and the Dream: Afrofuturism and Black Religious Thought,” will be published by the Ohio State University Press as part of the New Suns: Race, Gender, and Sexuality in the Speculative series.