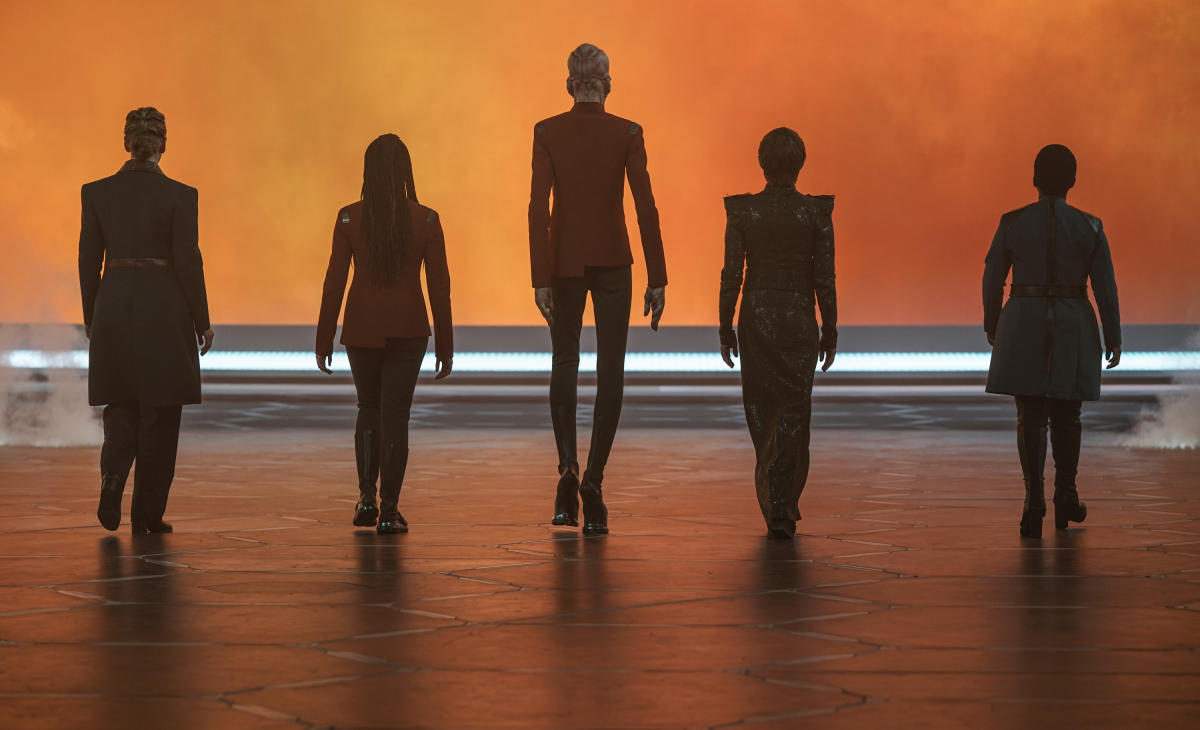 Season four was interesting for Star Trek: Discovery. The show eventually adopted a more episodic format, only to fall back into an ongoing storyline in the second half of the season. But today’s finale once again promises a return to the things that make Star Trek, well, star trek. And while Discovery also made these promises at the end of last season, there is more reason to believe that this time the changes will stick.

It starts with the fact that while this season’s main threat began as a space anomaly (known as the dark matter anomaly, or “DMA”), it has been discovered to be simply a a harvesting tool used by a previously unknown species, that of the Federation. calls the 10C. She may have seemed innocuous to 10C in her role as farmers, but the Federation ended up in the role of a rabbit in front of a plow. The DMA destroyed Kwejian; Ni’Var (née Vulcan) and Earth were next.

In previous seasons, this would have shifted Starfleet into action hero mode, and some characters argued for a more assertive and violent approach. But instead of just jumping into the fray, we had a lot of… fights. It might not sound exciting, but it’s always been one of the things Star Trek does best: people discuss conflicting ideas. Some argued for a peaceful solution and this was ultimately the chosen solution, as it was closest to the Federation’s philosophy of peace and exploration. In other series, it may seem like a terrible idea, but Trek is supposed to be, in theory, a utopia. This type of thinking is one of the cornerstones of the franchise.

There are those who disagree, led by Cleveland Booker and Ruon Tarka. But while their actions turn them into antagonists, they don’t become villains. We’ve seen this in previous shows like The next generation and Traveler, where terrorists like the Maquis were treated with empathy. In Discovery it’s even more prominent given Book’s status as the main character, but also the philosophy of the show as shown in Star Trek which is all about feelings. While the show is sometimes criticized for all the crying, here the emotional elements are well balanced, with everyone’s motivations clearly articulated to each other and to the audience. It’s easy to understand each character even if you disagree.

And understanding is key to the plot here; 10Cs are not carbon-based lifeforms and they do not communicate like humanoids do. It’s a classic Star Trek problem, as seen in episodes like “Darmok” or “Amok Time.” So last week’s episode was all about the crew and various ambassadors methodically working through mathematical and chemical solutions to build a working bridge language. They managed to establish at 10C that there were issues with the DMA, opening the door to further negotiations in this week’s episode.

“Coming Home” has many meanings in the context of the actual episode. There is the threat of DMA heading towards Earth, there are a number of scenes set in our solar system involving the return of character Sylvia Tilly and the reconciliation between Michael Burnham and his lover Cleveland Booker, the person who was rooted in the 32nd century.

But there’s also a meaning to the fact that the episode is where Discovery finally reconciles itself as a Star Trek spectacle, making its climax the drama not the struggle to evacuate a doomed planet, or the attempts to stop Tarka’s plan, but the real face-to-face discussion (for so say) with the 10C. It has nothing to do with the action-based approach of Abrams’ films or even previous seasons which dealt with war, time travel and evil computers. It’s diplomacy. It’s a lot of talking, and sitting down and talking about feelings.

And some of those feelings are what you would call… environmentally conscious. It is not enough for 10C to simply stop destroying planets that harbor sentient life. The thing is, DMA also creates pollution and that too needs to be stopped. With Earth in immediate danger, that seems like an unreasonable request at the moment, but it’s also very much within the philosophy of Star Trek to also consider its general societal and galactic impact. The core of Star Trek is humanism and social justice, and so many classic episodes deal with issues of identity, civil rights, and environmental issues. Discovery has spent so much time dealing with one massive violent crisis after another that it hasn’t had time for simpler humanist metaphors, and bringing it to the end here seems to indicate a desire to address these issues further in future seasons.

The whole outcome makes this promise: the Federation is getting stronger, the Discovery the team takes time for itself, and a very special guest near the end seems to be the series making its politics clear to segments of the audience who like to decry “Woke Trek.” Star Trek has always been awake, but Discovery only dipped his toe in the water in previous seasons. With its fifth season on the horizon, it’s ready to dive right in.