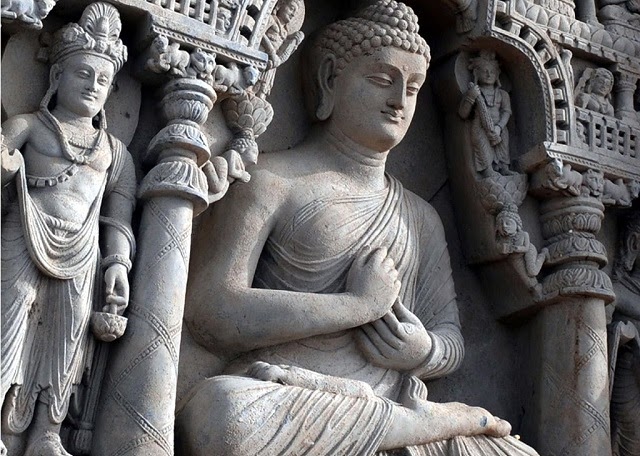 Disfigurement of religious harmony in the South Asian region

The relationship between Buddhism and Pakistan is deeply rooted.

The South Asian region is undoubtedly a paradise on earth, blessed with plenty of scenic beauty, mystical serenity and natural sublimity. From Nepal to Pakistan and from Sri Lanka to India, most people have hearts enriched with love, kindness and sympathy for all mankind. Although the South Asian region includes people following different religious philosophies, their “philosophical” differences never create hostile distances between them. From Buddhism to Hinduism and from Sikhism to Islam, one finds here in large numbers the followers of all religions; in some places in the minority and in some places in the majority.

This is the reason why we find countless temples, gurdwaras, churches and mosques here in almost all parts of South Asia. For example, in Pakistan the members of the Buddhist community number no more than a few thousand, but there are countless religious icons here in Pakistan belonging to the Buddhist heritage. These icons include Fasting Buddha at Lahore, Relics of Buddha at Taxila, Dharma Rajika Stupa at Taxila, Shatial Rock Carvingin Chilas, Buddha Healing Statue and Seat of Saints at Jaulian, Sleeping Buddha Statue at Haripur , the Buddhist Stupa at Mohenjo-daro, Jehanabad Buddha at Swat and the Water Spring Throne at Takht-i-Bahi, Mardan. The same goes for churches, Hindu temples and Gurdwaras; they are also in large numbers. The government of Pakistan spends millions of rupees to look after the sacred places belonging to the Buddhist, Christian, Sikh and Hindu community.

Sadly, nearly a decade ago when Pakistan was experiencing a severe wave of terrorism, some of the historic Buddhist religious icons were reportedly damaged by foreign-backed terrorists near the Pakistan-Afghan border area. It is also a very very painful fact that due to some Indian disbelievers, Pakistan could not be a safe place for tourists, especially for those who wish to visit Pakistan to see their sacred places; people from the Sikh and Buddhist community were at the top of the list among them. Recently, the BJP government issued a notice to Sikh and Hindu pilgrims coming to Pakistan ordering them to desist from staying as a guest of any Pakistani citizen. The notice further warns that Indian pilgrims who accept hospitality from Pakistani citizens will be blacklisted for the future. Nowadays, about 495 Sikh pilgrims from India visit Pakistan to celebrate Maharaja Ranjit Singh’s birthday. This unethical advice rather a warning is a proof that the people of Pakistan welcome Hindu and Sikh pilgrims very warmly and this warmth is definitely not acceptable to the BJP government.

As for the relationship between Buddhism and Pakistan, it is undoubtedly deeply rooted. It was Raja Tri Dev Roy, the chief of the Chakma tribe who openly supported and favored Pakistan during the 1971 war with India. This war resulted in the separation of West Pakistan from East Pakistan. After this separation, Raja Tri Dev Roy left the Chittagong region of Bangladesh and settled in Pakistan. In Pakistan, he founded the Pakistan Buddhist Society and remained its president from 1996 until his death in 2012. Throughout this period, his family remained settled in Bangladesh. Raja Tri Dev Roy lived a very active social, political and religious life in Pakistan. Pakistanis continue to admire and appreciate his role as a politician, diplomat and writer. He had also been Minister of Minority Affairs in the Zulfikar Ali Bhutto cabinet. It is also a very interesting fact that the Buddhist and Muslim communities have never been hostile to each other because both religions promote love, kindness and equality for all human beings, although that there have been conflicts and clashes between people belonging to the two communities in some places, especially in Bangladesh, but not on a religious basis. The fundamental reason for this harmony is that Buddhism, like Islam, ignores the inhuman caste system that is particularly prevalent in extremist Hindu societies.

According to the preaching of the Buddha, individuals might be able to attain enlightenment in this life and furthermore caste was not a punishment for deeds committed in a past life. Buddha further preached that prejudice is an example of ignorance and that believing that we are somehow superior to those around us is an example of craving or fear. Today, for Hindu extremists in India, Buddhism has become the most serious threat as countless low caste Hindus are tired of their daily persecution at the hands of high caste Hindus and that is why they find an area of comfortable shelter in Buddhism. For Buddhists, the caste system is an example of discrimination and it is something they do not support. No doubt it is quite true that not all Hindus in India are extremists; not all of them were in the past, but extremism has always been a dominant factor in this society. Whether Muslims, Sikhs, Christians or Buddhists; and even low caste Hindus commonly known as Dalits, everyone is exploited and abused by extremist Hindus.

Low-caste Hindus are reverting to other religions in large numbers simply because of this insulting mistreatment. According to Wikipedia, in the 1951 Indian census, 181,000 (0.05%) respondents declared themselves to be Buddhists. The 1961 census showed an increase to 3.25 million (0.74%). According to the 2011 census, Scheduled Caste Buddhists have increased by 38% in the country. In short, Buddhism is growing rapidly in the Scheduled Caste (Dalit) community. This large number of Dalits embracing the Buddhist religion is simply a reaction against the mistreatment of low caste Hindus. But it seems that such a large number of Hindus changing their religion never bothers the BJP government. Experts say Modi-led government is intentionally working on a plan to make India a land only for Hindus; upper caste Hindus only. Recently, during Modi’s visit to Nepal on May 16-17, 2022, an incident of a very trivial nature occurred which proved that no one else could ever be more rigid, prejudiced and narrow-minded than Mr. Modi. Apparently he was there in Nepal to attend Gautam Buddha’s birth celebration in Lumbini, but critics say that visit was something more than fostering religious and cultural ties; it must be viewed through a broader geopolitical lens. They believe the visit should send a clear message to Nepal that the country’s growing closeness to China is not acceptable to India. The point to note here is that today China has the largest Buddhist population in the world, with an estimated 185 to 250 million practitioners. Proximity to China could mean an inclination towards Buddhism and certainly such closeness and inclination could never be acceptable for India. That is why Mr Modi chose to land by helicopter at a helipad in Lumbini, just 18 kilometers from Gautam Buddha International Airport. Gautam Buddha is Nepal’s second international airport built with the help and support of China. Honorable Prime Minister of Nepal Sher Bahadur Deuba had inaugurated this airport on the same day on the morning of May 16 when Mr. Modi landed in Lumbini. By avoiding landing at this newly inaugurated airport, Mr. Modire reflected his personal hesitation to approve the infrastructure activities of a Buddhist-majority country, China, in Nepal. One could never expect such kind of narrow-mindedness from the prime minister of a country that bills itself as the largest democracy.

2022-06-28
Previous Post: Ambassador of Kazakhstan calls Minister of Science and Technology
Next Post: Barcelona debt, Everton FFP and Neymar’s future: why June 30 is so important