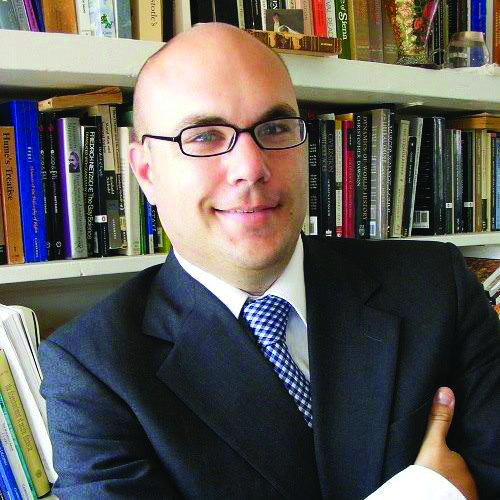 As a specialist in education policy, Lecturer in political science Kevin Walker has the distinctive ability to integrate his academic interests not only into the content of his courses, but also into the teaching methods he uses.

“I decided quite early that I wanted to teach at the university. I had such good teachers in middle school — I thought ‘Wow, I can do what they do'”, Walker noted. “So I pursued a degree in political philosophy for my master’s and political science for my doctorate.”

Walker joined the Colgate community two and a half years ago as a visiting professor. He originally signed for a one-year contract, which has now been renewed twice.

“Colgate has been wonderful though. The students here are great. Everyone is very helpful and encouraging. I love my classes,” Walker said.

This semester, Walker is teaching two sections of a course called “Congress” that covers the legislative process, as well as a graduate-level political science course called “Religion and Politics.” Both courses focus on American politics, but Walker has previously taught a number of world politics courses.

Walker has a well-defined interest in education policy, particularly higher education and its interaction with American politics.

“It kind of grew out of my thesis. I had a chapter where I talked about the rise of law schools. I was focusing on the Supreme Court, that was my thesis. I still love the law, but that chapter was very intriguing,” Walker noted.

Through his dissertation and subsequent studies, Walker acquired a fascination with the history of university education in this country. A story that, according to him, has seen many marked developments.

“[In] the old college, they were only there to train elites who would become professionals. Not with a specific skill but just liberal arts in general — very heavy on Greek, Latin, mathematics and moral philosophy”, Walker noted. “In the 1870s there was Charles Elliot at Harvard who became the new president and said we were just going to drop all the classic stuff. You can do it if you wish, but it will be in a ministry. And if you don’t want it, there will be other departments and you will have options. Students can build their own education based on their interests.

Walker had strong thoughts about Colgate’s own philosophy of education and the role students and faculty play here in bringing that philosophy to life.

“I feel like there’s an agreement between the students and the faculty here about what we’re doing here. The students understand this and it is very clear to them. They are there to learn and have an attitude that at least respects what they learn. And at the faculty too, everyone is in their own discipline but we all work together to build this culture that we have here — which is really good to see.

In terms of personal research and publications, Walker often finds himself working on a number of pieces in multiple disciplines at the same time. Currently, he is writing an article for the Association of Core Texts and Courses on the ancient Greek historian Herodotus, an article on the Yale Report of 1828, and a few other articles.

Walker’s wife, Rachelle Walker, who is also a professor in the political science department at Colgate, specializes in comparative politics and African politics. The Walkers share three young children.