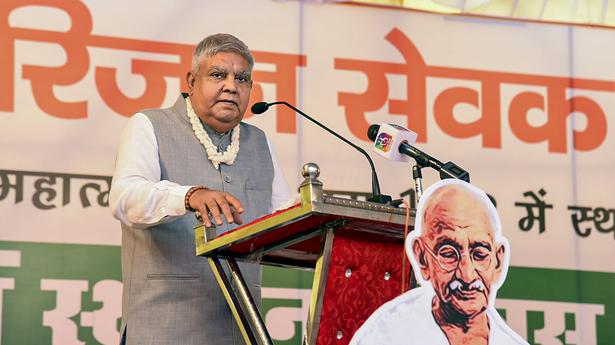 Mahatma Gandhi’s philosophy of equality of all human beings regardless of caste and creed inspired India’s Constitution, Vice President Jagdeep Dhankar said on Saturday at the inauguration of the conference Two-day sadbhavana in New Delhi, marking the 90th founding day of Harijan Sevak Sangh, which was founded by Mr. Gandhi in 1932.

Mr. Dhankar said Gandhi’s ideals drive the fundamental rights and guiding principles of the Constitution, adding that the Mahatma’s teachings will remain forever relevant to humanity.

During the inauguration of the conference, the Vice President also paid floral tributes to the Father of the Nation and Acharya Vinoba Bhave.

Referring to Mr. Gandhi’s motivation for founding the Harijan Sevak Sangh, Mr. Dhankar said the Indian freedom struggle was more than just a political movement. “It was a call for social unity and political freedom,” he said.

Quoting the Mahatma, the Vice President said that untouchability is not an integral part of Hinduism and that human brotherhood, the welfare of people and the welfare of the last person in society are “the cornerstones of Indian culture”.

“Gandhi iThe philosophy of was rooted in the centuries-old teaching of ‘ Vasudhaiva Kutumbakam“- the whole world is one family,” he said, adding, “The same ideals of Gandhi found expression in the government’s commitment to ‘Sabka Saath, Sabka Vikas, Sabka Vishwas, Sabka Prayas’ It’s not a political commitment, it’s a national commitment.

“It is gratifying to note that in recent years an ecosystem of consensus with Gandhian philosophy has emerged. This ensures the full exploitation of the potential and talent of all, especially the marginalized,” Mr. Dhankhar said.

He also paid tribute to the thoughts of Dr BR Ambedkar, recalling his quote on how social democracy was imperative for the survival of political democracy. “The marginalized sections of society have been empowered through the determined efforts of the government in recent years and as a result, social democracy can now be seen on the ground,” he said.

Mr Dhankar praised the Harijan Sevak Sangh for living up to Gandhi’s ideals i and conveyed his best wishes for his future endeavours, suggesting that the organization should become the “nerve center” of Gandhian thought. “I am ready to serve as the foot soldier of this great establishment,” he said.