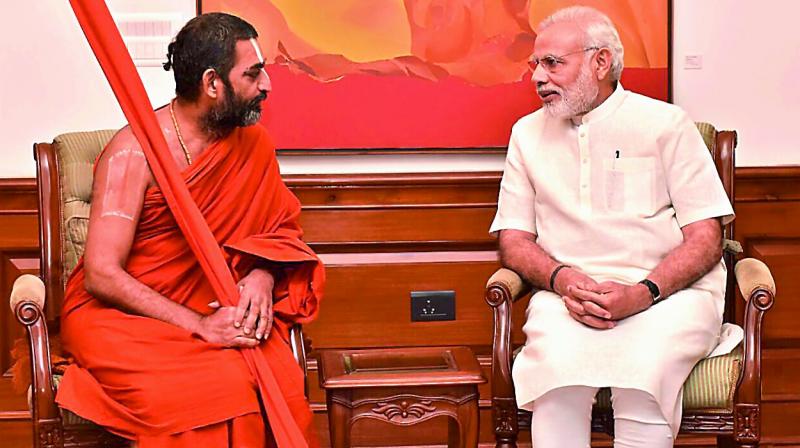 Hyderabad: In the modern world of paradoxes, globalization creates opportunities and wealth for both nations and individuals and yet seems to be floundering – a panacea, but a threat. As incomes and socio-political inequalities continue to increase, the philosophy of “equality” as preached by Sri Ramanujacharya over 1,000 years ago is increasingly relevant to the modern world today. hui and for the future, says Sri Sri Tridandi Chinna Srimannarayana Ramanuja Jeeyar Swami.

With the unveiling of the 216-foot-high Equality Statue by Prime Minister Narendra Modi in February next year in his ashram near Hyderabad International Airport, Sri Chinna Jeeyar Swami’s dream of taking Sri Ramanujacharya’s profound wisdom and theological as well as social reforming contributions to humanity as a whole, and especially to the younger generations on a “very large scale”, is about to become a reality.

Chinna Jeeyar Swami is one of the foremost living Indian scholars and teachers of Vedic and Sanatan wisdom, who is known for his simplicity as well as his kindness and approachable nature.

Sitting on the floor in his little kuteer, an ordinary structure without the pomp and ceremony that is common among contemporary spiritual gurus, the Swami shared his views on the philosophy of equality, the ideas of the Vedas, globalization, Hinduism and the perceptible. threats to the Sanatana dharma from large-scale and organized religious conversions.

He also spoke about the historical and spiritual ethics of the people of Telangana and the rebuilding of Yadadri Temple, among others, in an exclusive interview with Deccan Chronicle.

Below are excerpts from the interview.

Q: How relevant is Rama-nujacharya’s philosophy in today’s world? How do you want to bring its message to present and future generations?

A people’s technology, circumstances, attitude, and financial situation may change, but they will always breathe, eat, drink, and sleep – these are eternal human truths. In the same vein, the philosophy that Ramanuja offered to the world, as a natural phenomenon, is relevant even after a thousand years.

What we see in the world today is selfishness, a struggle for domination and a thirst for possessions. The expansionist tendency is also observed among individuals and nations in the age of globalization.

Q: But globalization is the order of the dayâ€¦.

Nothing explains globalization better than the concept of “Vasudaika Kutumbakam” (everyone living is one family) as preached in our Vedas. We have always had an Indian tradition of globalization. In Ramayana, we see that Rama never tried to establish his rule over other realms although he had the opportunity to do so – whether in Kishkinda after killing Vali, or in Lanka after having killed Vali. killed Ravana. He left it to the people to continue his reign aligned with his own culture and traditions. It is this texture of globalization that India offered to the world. We must understand, cherish and protect the Sanatana Dharma so that we can pass it on to the next generation in a spirit of truth, knowledge and inheritance.

Q: Whenever Sanatana Dharma is in question, critics refer to the biggest problem in Hindu society, the caste system, a reflection of inequality?

Refer again to Rama’s philosophy of working with humans in Ayodhya, apes in Kishkinda, and demons in Lanka – if you like to see them as diversities of caste, race, color, attitude, d ethics and cultural norms. However, there was coexistence, a way of helping each other, of cohabiting, in a lasting way. The caste system has been mentioned in the Vedas but is not meant to be misinterpreted to be used politically to oppress any particular section. It was about sharing responsibilities and living in cohesion.

This is where Ramanuja’s basic philosophy of the coexistence of â€œsareeraâ€ (body) and â€œsareeriâ€ (soul) must be understood correctly in order to understand the world. There are, and must be, opportunities for everyone, and equal opportunity must be offered to all. If we think of the universe as one body, no member is trying, or should try, to dominate another; however, each organ has its difference, its specific function; no superior, yet each vital for greater harmony.

Q: Part of the population fears that Hinduism is threatened, mainly because of religious conversions. What is your take, as one of the most influential modern Hindu saints, on conversions?

A proper ideology and philosophy, not influenced by politics, but professing and instilling values â€‹â€‹and showing the purpose of life is crucial. The Vedas preached such a philosophy. Unfortunately, the Vedas too have been either misinterpreted or partially interpreted. Ramanuja integrated their wisdom and preached them in their entirety. There are other philosophies that strive for dominance, but Indian philosophy shares pain and joy and leads a person to a fair goal of union with Brahma, to experience divine joy.

Q: But why a statue? In the past, temples were built as part of the propagation of religion or ideology. What does the statue of equality mean?

Even in Ramanuja’s time, when the mantra (a mode of communication) was very restricted, it was no ordinary task to propagate its philosophy. He traveled all over the country and tried to enlighten the other rulers and the ruled. He showed the relevance of this wisdom not as an esoteric indulgence but in a common light. In the days of Google … people are looking for the exceptional (a big smile mischievously lights up his face) … the biggest, the biggest, the strongest, the highest. The statue is a physical wonder that will draw people to this place; but once here, they will stick to wisdom.

Q: So, is this some kind of adaptation for better subsistence?

Yes. If a person clicks on the tallest statue, finds the Equality statue, and visits this place, they will begin to wonder, look at each component, and try to understand the philosophy behind it. We are building 108 temples around the statue. Each conveys a message of equality based on events that have taken place at different times. Even if one in a thousand were inspired, our effort would have been worth it.

Q: We are talking about the development of Hyderabad in the context of infra, IT, pharma, real estate. But large-scale spiritual development can be seen with the Statue of Equality and the rebirth of the Yadadri temple. You have been a guiding force for both …

This land, which today we call Telangana, has a great heritage of spirituality. People respect traditions a lot. Normally most women attend spiritual gatherings in large numbers, but when we first came to Karimnagar in 1981, we found a large number of men. Spiritual activities are repeated there in large numbers. People are the foundation that makes such initiatives possible, in addition to God’s blessings.