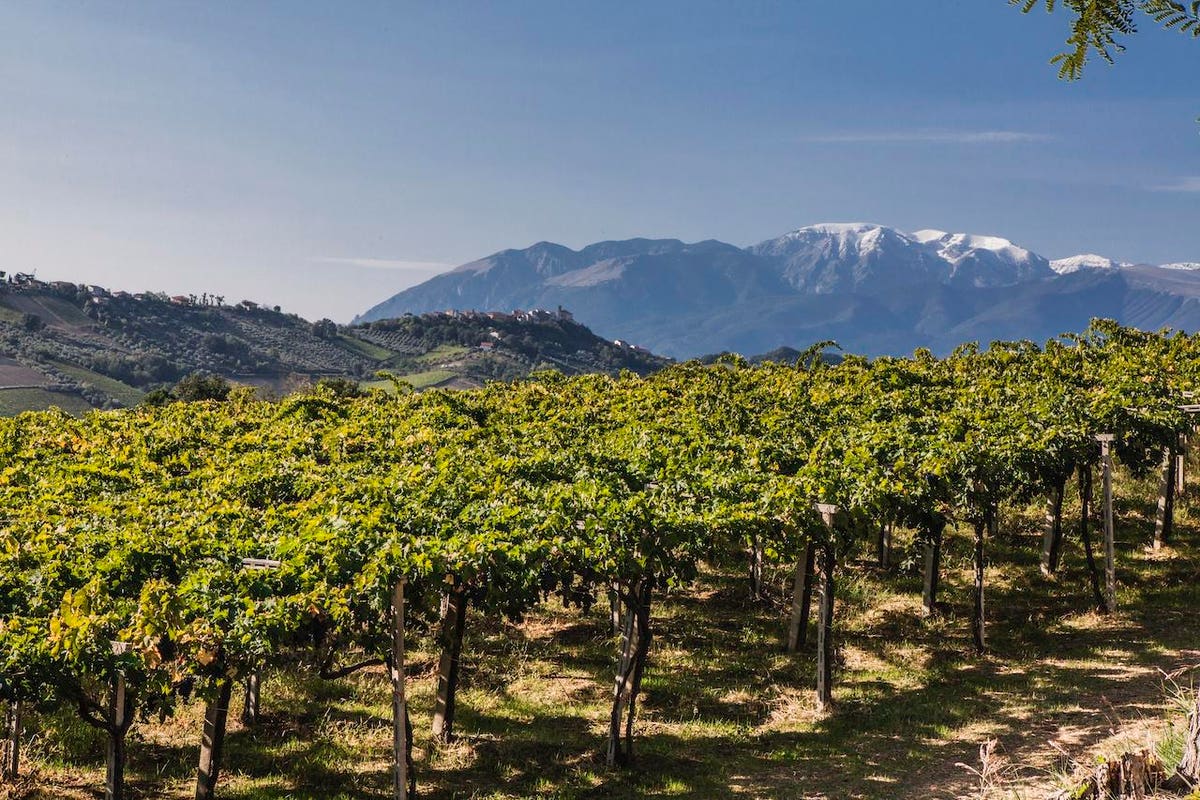 If you love Italian food and wine, you’ve probably ordered a bottle of Montepulciano de Abruzzo – the delicious, fruity, sweet, dark-colored wine from the Abruzzo region of Italy. You’re also most likely to have found it at the start of the wine list under Affordable and Accessible Wine Styles. However, many winemakers in Abruzzo are trying to shift this low-cost positioning to a more upmarket positioning, and they have very compelling reasons why now is the time to recognize the complex terroir that can be found everywhere. the region.

That doesn’t mean Abruzzo still won’t offer affordable entry-level wines, but the region has evolved into a place where there’s a new guard of wineries who want to showcase the impressive advancements that they have achieved in viticulture and winemaking. Recently, on a Zoom call, a group of ten Abruzzo wineries shared how and why they are changing their wine business strategy.

“Abruzzo is in a phase of its evolution where it is repositioning itself,” explains Colin Proietto, family owner and sales manager at Agricosimo Winery. “We are now focusing more on family estates, embracing organic farming more and moving from a varietal to a terroir-driven approach.”

Rodrigo Redmont, family owner of Talamonti Family Estates, adds: “In the 1970s and 1980s, Abruzzo was dominated by large cooperative wineries. Most families sold their grapes to the cooperatives, and the cooperatives produced cheap and affordable wines. However, for 20 years, family estates have started to develop and produce their own wines that highlight the terroir.

Given this more focused attention on producing the best wine from an individual estate, coupled with organic farming and more advanced winemaking techniques, many Abruzzo wineries are now producing wines that are, in fact, more complex and reflect the unique attributes of the region.

The Abruzzo wine region is located in central Italy, about two hours drive east of Rome. It stretches for 130 kilometers along the Adriatic coast and has many steep mountains, including the Gran Sasso, which is one of the highest peaks in Italy at 9554 feet (2912m). Some of the best vineyards are on hillsides with ocean views in the distance. It has a Mediterranean climate with abundant sunshine along the coast and an average rainfall of 26 inches per year. Inland, in the Apennine mountains, it is a more continental climate with snow in winter.

Abruzzo has been producing wine since the 6e century BC, with a heritage from the Etruscans. Today, according to the Consorzio Vini D’Abruzzo, it has around 250 wineries, 35 cooperatives, 34,000 hectares of vineyards and produces around 1.2 million bottles of wine per year. Abruzzo exports 65% of its wine and has an annual turnover of around 300 million euros ($319 million).

The main red grape variety is Montepulciano de Abruzzo, which accounts for almost 80% of its production. However, they also grow Merlot, Cabernet Sauvignon, and other red varieties. The most unique white grape variety is called Pecorino – similar to cheese – and named after the sheep that ate this variety in the vineyards. It has a floral nose, with hints of lemon, white peach, spice, lively acidity and a touch of salty minerality. Other regional white grape varieties include Trebianno and Cococciola.

The top five ways the Abruzzo wine region differentiates itself

So how does the Abruzzo wine region intend to differentiate itself and go beyond its image of only producing smooth red wine at low prices? The ten wineries have identified five main development axes for Abruzzo to enable them to implement a higher-end wine business strategy:

1) Family estates focused on the production of high quality wines – with the movement over the past 20 years for families to stop selling all their grapes to cooperatives and instead build their own vineyards, the focus has shifted to quality. With the family name on the wine label, there is more pride and skill in winemaking. Andrea Bianco De Sipio, of Di Sipio Winery, explains: “We have added a lot of new technologies to our cellars and are experimenting in the vineyards to reduce the amount of copper and sulfur sprays. These types of advances produce high-quality wines, and a few Abruzzo wineries, such as Azienda Agricola Valentini and Emidio Pepe Winery, have already upgraded to the $100+ luxury category on their bottles of Montepulciano d’Abruzzo.

2) Increased focus on terroir – While the region once focused on mass production, today wineries are trying to showcase the unique terroir (soil, climate, slope, winemaking philosophy, etc.) of their vineyards. They try to show how different Montepulciano de Abruzzo can taste if produced in the DOCG of Montepulciano d’Abruzzo Colline Teramane compared to other DOCs, and even specific estates in the same area. Different winemaking techniques, such as aging in longer oak barrels, batonnage on Pecorino, or even fermentation of the wine in terracotta tanks rather than stainless steel, as is done at Ciavolich Winery, also contribute. to highlight the regional terroir.

3) Growth of certified organic vineyards – due to its favorable climate for wine grapes, Abruzzo is home to a large number of organic vineyards, and many wineries in the region will include the organic label or the word “organic” on their label. Many others practice organic farming, but have not yet spent the time or money to obtain official certification. Because of this new focus on organic farming, there are often more pure fruit flavors and texture in wines that add to their distinctive character. Organic certification also appeals to many consumers.

4) Wineries are looking for very unique certifications – in addition to obtaining organic certifications, a number of wineries in Abruzzo have become certified vegan and proudly display this certification on their websites and label. Talamonti Family Estates recently became the first winery in the world to be certified for Equality, Diversity and Inclusion. This is a new certification offered by Arborus. “Agriculture in Italy has been heavily male-dominated,” says Rodrigo Redmont, a member of the Talamonti family. “I have two daughters and I want to leave them a better place for the future. At Talamonti, we have decided to use diversity and inclusion as a guiding principle of our policies and our approach to life, we have therefore participated in the certification process.

5) Increased focus on tourism and national parks in Abruzzo – Abruzzo is endowed not only with high mountains and sunny beaches, but is made up of three national parks and numerous regional reserves, making it the only region in Europe where more than 30% of the territory is protected by parks . This brings many tourists to the area to enjoy outdoor activities, but also to feast on the regional cuisine, known for its fresh seafood, pasta, cheese and lamb. A unique tourist pastime is fishing from a trabocchi – a large wooden structure with nets that extends into the ocean.

Indeed, there are probably very few areas in the world where a winery has vineyards in a national park, but the Passetti winery has been growing organic vineyards for five generations, and a national park encompasses their vines. “We are the only winery in Abruzzo to have vineyards in the national park,” says Annesa Vanarelli, export manager at Passetti. “We work very carefully with park officials to ensure that the environment is protected and that everything we do is organic and environmentally friendly.” Another organic winery, Menicucci, has combined wine tourism with its estate by building a boutique hotel and restaurant on the property.

Going from a commercial strategy of low-cost wines to ultra-premium wines is not an easy task. However, the Abruzzo region has received funding from the European Union as part of the “Charming Taste of Europe” campaign to promote all positive changes within their region. A series of Zoom sessions similar to this one are aimed at wine buyers and journalists, as well as press trips for foreign sommeliers and writers to visit the region to taste the wines and see the changes in the cellars and the vineyards. It’s a good start, but it needs to be expanded and enhanced over time, so that consumers and wine buyers around the world begin to recognize all the positive changes that are happening in the Abruzzo wine region in Italy.

2022-06-02
Previous Post: The Philosophy of the Preamble to the Vienna Convention on Diplomatic Relations – Analysis – Eurasia Review
Next Post: UW-Stout Limnology Center Helps Bring Clear Water Back to Area Lakes