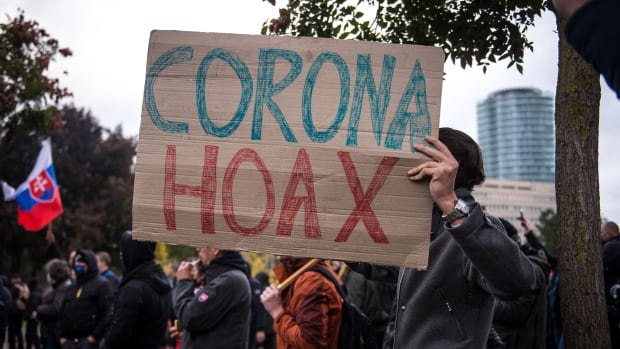 How to convince a science denier to reconsider their beliefs

According to science philosopher Lee McIntyre, it is possible to change the mind of someone who has opinions that are not supported by scientific evidence.

Science denial comes in many forms: climate change deniers, anti-vaccine people, who believe COVID is a hoax, that evolution is not real, and who believe the Earth is flat.

With the COVID-19 pandemic and climate change creating enormous challenges for humanity, denying science has never been more dangerous.

So what can you do if this science denier is someone you care about – or maybe even someone in your family?

McIntyre, a researcher at the Center for Philosophy and History of Science at Boston University, has decided to explore this topic in a new book called, How to Talk to a Science Denier: Conversations with Flat Earth Dwellers, Climate Deniers, and Others Who Defy Reason.

McIntyre spoke to Quirks & Quarks host Bob McDonald on how science deniers build and defend their beliefs with factual information on how to change their mind.

Here is part of their conversation.

You write in your book that there is a common script behind all science denial reasoning, and that if we know the script, we can change it. So what’s the script?

This script was discovered by Mark and Chris Hoofnagle, and it was further developed by John Cook and Stephen Lewandowsky, who are cognitive scientists and it goes like this: There are five tropes of scientific denial reasoning.

Every science denier picks data, believes in conspiracy theories, engages in illogical reasoning, leans on fake experts and denigrates real experts, and here is my favorite: This science has to be perfect to be credible.

Now if you understand this script, you have a head start.

There was a study in Nature Human Behavior in June 2019, which justified this model. It’s called technical rebuttal and I was very happy to see that this was really the first empirical evidence to show that it could be effective in convincing science deniers to give up their beliefs.

When you say technical rebuttal, what do you mean by that?

Technical rebuttal is simply about understanding these five tropes and learning how to use them to repel. So, for example, someone who claims that science has to be perfect to be credible.

A lot of times I would say to the Flat Earth people something like, “OK, so you pretend you’re more of a scientist than a scientist?” “

“And are your beliefs based on evidence?” ”

“So what evidence would it take to convince you that you were wrong?” “

They weren’t ready to talk about it. And my experience is that if you listen to someone and make it clear that you respect them as a person – even if you don’t respect their belief, but ask them why they believe it – they’ll end up saying something. that you can use.

There is sort of a general theme in the book that science deniers have a fundamental misunderstanding of how science works, that deniers may already have their conclusion before they start and look for evidence that matches that, which is contrary to the way science works.

What I respect most about scientists is that they test their biases against the evidence. And, by the way, they can answer that question I put to the Flat Terrans. If you ask a scientist what evidence might change your mind about Hypothesis X, they can tell you.

It is then that they are in this sort of hermetically sealed box where the evidence cannot reach them. And this is exactly the opposite of what I call the scientific attitude.

You also mentioned in the book a technique called content rebuttal. How it works?

Well, content rebuttal is another method that Betsch and Schmid talked about in their article. It’s a little harder to do because you actually have to be an expert.

If you’re a climatologist and you chat with a climate denier and they come up with the false claim that the global temperature hasn’t risen in the past 17 years – or whatever, they claim to be right now – you know the studies and you know the data and you can push back with the content.

Now, in this study, they looked at both the content rebuttal and the technical rebuttal side by side and found that they were both equally effective and there was no additive effect, which is spectacular news for allies of science because it means that even though I am not a scientist, I can go out there and be as effective as a scientist uses content rebuttal, by rebuttal myself technical.

Produced and written by Sonya buys. This Q&A has been edited and condensed.