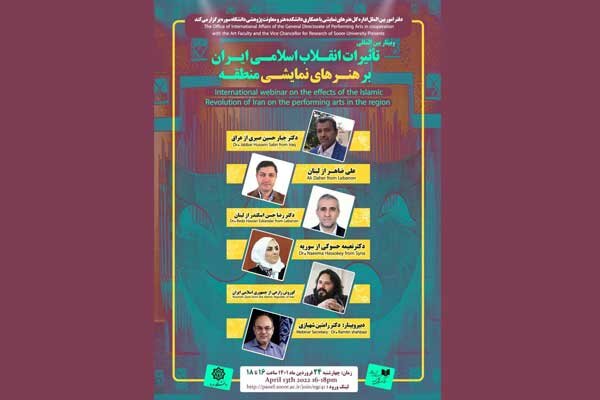 The Center for Dramatic Arts of Iran, in collaboration with the Faculty of Arts and the Vice-Chancellor for Research of Soore University, is organizing an international webinar on “The impacts of the Islamic revolution of Iran on the arts of show in the region” within the framework of the Islamic Revolution Art Week. According to the report of Public Relation of the Dramatic Arts Center of Iran, a number of artists and scholars from Syria, Iraq and Lebanon, as well as a number of well-known theater experts in our country, participated in an international webinar to express their views on “They are paying for the effects of the Islamic revolution on the performing arts in the region.”

In this international webinar, which will be held from 4-6 p.m. on Wednesday, April 13, concurrently with the Islamic Revolution Art Week by the International Affairs of the Irani Drama Center in collaboration with the Faculty of Arts and the Vice Chancellor for Research of Soore University.

There will be theater critics, Naeema Hassokey from Syria, Jabbar Hussein Sabri from Iraq, Reza Hassan Iskander from Lebanon, Ali Zahir from Lebanon and Kourosh Zarei from our country will present their views. Naeema Hassokey is one of the artists and researchers in the field of culture and art in Syria who obtained her doctorate in Persian language and literature from Tarbiat Modares University. She graduated in Arabic language and literature from the University of Aleppo. Wrote numerous articles from Persian to Arabic in the Syrian magazine “Sajsour Saghafieh”.

Jabbar Hussein Sabri is one of the experts and researchers in the field of theater in Iraq, who obtained his doctorate in philosophy from the Faculty of Fine Arts of the University of Baghdad. Besides writing, translating and directing several plays in the field of theater and writing several research works in various fields of theater, he is also active in the field of criticism. Receiving the award for the best combined performance for the play “Halabja al-Qalb” at the Al-Salam Festival, being a member of the Union of Iraqi Writers, a founding member of the Theater Club of the Association of Iraqi Writers, a founding member of the Iraqi Culture and Art Center, expert in editing texts and viewing plays to the deputy of cinema and theater of the Iraqi Ministry of Culture, member of the jury of various festivals and competitions of theater and literature, scientific advisor of Al-Khashaba magazine in the field of performing arts and the presentation of several specialized articles in various theater departments are part of his cultural and artistic career.

Reza Hassan Eskandar from Lebanon is another participant in this webinar, who has a doctorate in art research and currently teaches in university collections such as the School of Fine Arts and Architecture of Beirut and the School of communications from Beirut. While working in various fields of film and television production, scriptwriting, directing and documentation are other executive activities of this researcher.

Ali Zaher from Lebanon is also one of the experts in the field of art, media and tourism in Lebanon, in addition to managing and organizing several artistic, media and tourism projects in the judging committees of several events arts and media in Lebanon, Syria, Egypt, Turkey, Tunisia, Qatar, United Arab Emirates and Iran were present. In addition, accompanying in joint film and television projects from different countries is another activity of this expert in cultural and artistic issues. Kourosh Zarei is also one of our country’s well-known artists and theater experts who in recent years, in addition to writing, acting and directing several theatrical, television and film projects, has staged various projects in different countries with the themes of revolution and resistance.

Each of them was welcomed by the public. In addition to his artistic and research activities in the field of theatre, he was also in charge of the management of the Performing Arts Center of the Islamic Propaganda Organization. This webinar will be broadcast live on Iran Theater TV starting at 4:00 p.m. on Wednesday, April 13.

It is necessary to explain that in recent days, two webinars “Aesthetics of the theater of the Islamic revolution” written by Farzad Maafi Ghaffari, researcher and university professor, with lectures by Hojjatoleslam and Muslims Abdul Hussein Khosropanah, Ali Montazeri, Mohammad Ali Khabari, Houshang Tavakoli and Mahmoud Farhang and “The role of the provinces” in the theater of the Islamic revolution “to the secretary of Saeed Asadi, university professor and director of the Publishing and Research Office of the Drama Center from Iran with the presence of Ali Rezaei from Hormozgan province, Jahanshiriar Ahmadi from Bushehr province, Reza Mir Manavi from Gilan province, Ahmad Sepasdar from Fars province, Mansour Heidari from East province Azarbaijan was one of the artists and researchers in the field of theater in the provinces within the framework of the “Week of Art of the Islamic Revolution”.