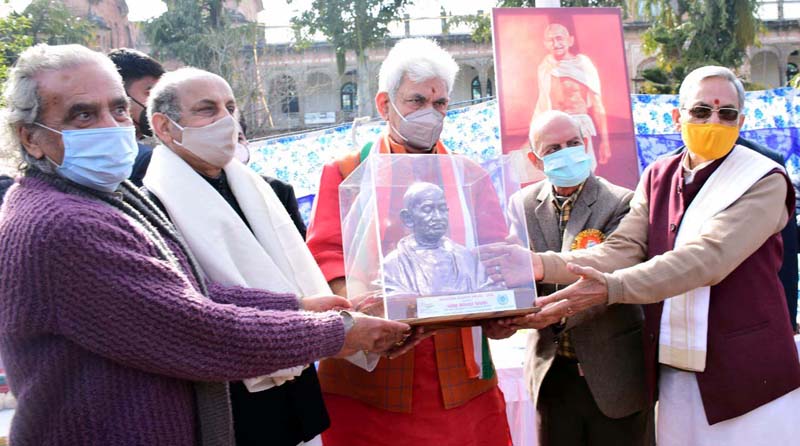 Tributes paid to the Father of the Nation

Excelsior Correspondent
JAMMU, January 30: Lieutenant Governor Manoj Sinha today paid tribute to the Father of the Nation, Mahatma Gandhi on his Punya-Tithi during an event hosted by Global Gandhi Family J&K, at Mubarak Mandi Heritage Complex.
Paying tribute to the “Father of the Nation”, the Lieutenant Governor said that the philosophy of Satya and Ahimsa, truth and non-violence of Mahatma Gandhi continues to be our guide.
“Bapu’s life and teachings will continue to be relevant for centuries to come. As the world becomes more interdependent than ever, its teaching of equal respect for one another and peaceful coexistence will become a more powerful instrument for the well-being of humanity,” he added.

Describing the high ideals of Mahatma Gandhi, the Lieutenant Governor emphasized that for the sustainable development of J&K UT, people’s participation is imperative to preserve our ecosystem. ‘Bapu insisted a lot on the balance between our development and ecology. It is our duty to integrate his vision into our development policy”, declared the Lt Governor.
The Lieutenant Governor appreciated Gandhi Global Family, J&K for undertaking several activities to promote Mahatma Gandhi’s philosophy and Gandhi’s values, especially to the younger generation.
He urged people to follow the values ​​of non-violence, social justice and equality which are the foundation of peaceful and syncretic coexistence, strengthening the bonds of community harmony, brotherhood and friendship.
The Lieutenant Governor also called on ‘Jan-Bhagidari’ to promote Swachhata and preserve ecology, in addition to strengthening greater public participation in our country’s development journey.
On the occasion, the Lieutenant Governor received the 2022 Mahatma Gandhi Award. He dedicated his award to the 1.25 crore citizens of J&K, calling them equal partners in UT’s growth story and working for peace, progress and prosperity.
Two minutes of silence was observed to pay homage to Mahatma Gandhi and Bhajans were also recited during the memorial event.
Laureates Padma Shri, Captain Bana Singh PVC, political leaders, members of civil society, senior police and civil administration officers, among others, were present on the occasion.
Earlier, as part of Martyrs Day, officials and staff at Raj Bhavan observed a two-minute silence in tribute to the Father of the Nation, Mahatma Gandhi and countless brave Indians who sacrificed their life during the struggle for freedom.