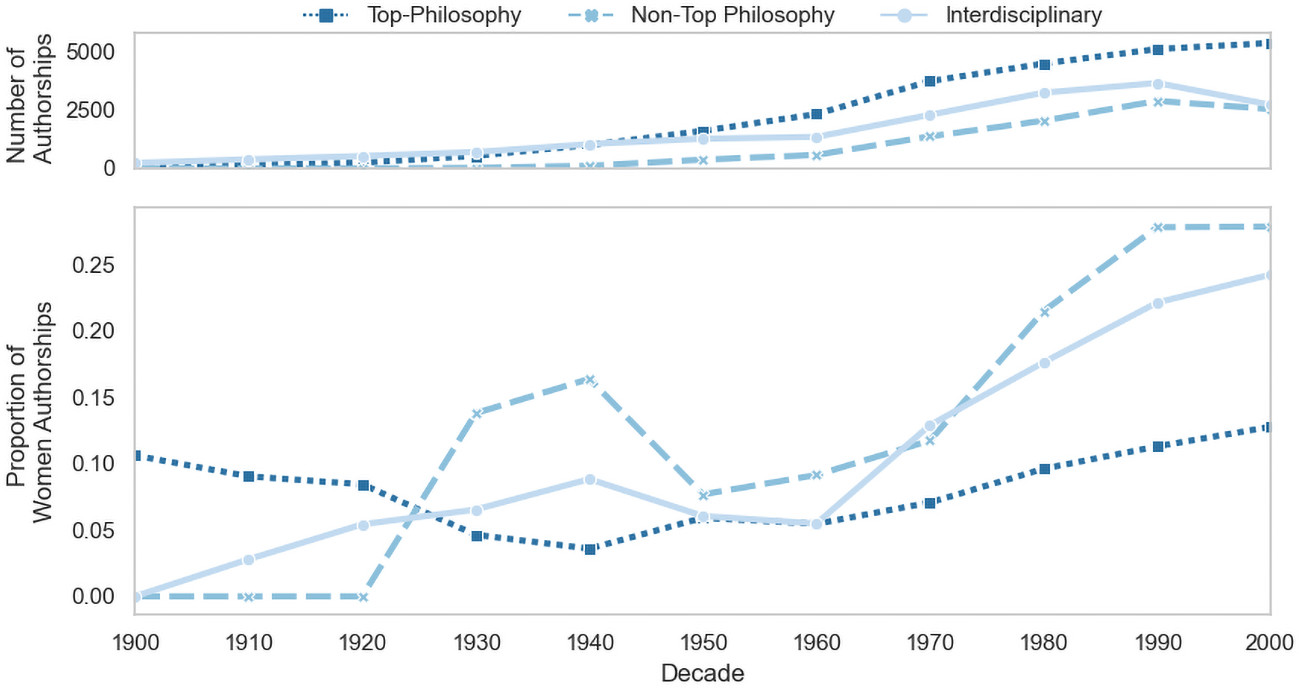 How many writings by women do philosophy journals publish? How does this vary by quality and type of journal? How does it vary depending on the type of manuscript revision? How have women’s publication rates changed over time?

These are the questions answered by a new study on the publication of women in philosophy journals, which has just appeared in Ethics. The study, by Nicole Hassoun (Binghamton), Sherri Conklin (AviAI Inc.), Michael Nekrasov (Santa Barbara) and Jevin West (Washington).

Below, you can see the evolution of the number and proportion of female authors in each type of journal from the 1900s to the 2000s:

In the following figure, you can see which are the 10 journals which have the highest proportion of articles written by women and which have the least, for the periods 1900-2009 and 2000-2009, with a color code by category :

The authors also used a Generalized Linear Model (GLM) to provide estimates of how the authorship of women in philosophy journals varies by field of specialization, and how this compares to the proportion of women working in these fields. :

(Fig. 9 from Hassoun et al). Generalized Linear Model (GLM) estimates of the proportion of female authors (2000-2009) per AOS journal compared to AOS faculty (2014). The estimated average proportion of female authors in all journals separated by journal category and AOS for the years 2000-2009. Error bars represent CI based on GLM output. The number of observations (articles for each AOS journal and category in the 2000s) is displayed at the top of the graph with the label “n=”. Note that this figure displays the average proportion estimated by the model across all articles in a journal category.

They also used the GLM to provide estimates of how the proportion of female authors varies by type of manuscript review (non-anonymous, double-anonymous, triple-anonymous):

(Fig. 11 from Hassoun et al) GLM estimates of the total proportion of female authors in all journals separated by journal category and review process for the years 2000–2009. Error bars represent CI based on GLM output (CIs are very wide due to limited data for non-anonymous review). The number of observations (articles for each journal category and journal type in the 2000s) is displayed at the top of the graph with the label “n=”. Again, note that this is the average proportion estimated by the model over all articles in a journal category.

The authors discuss their findings and possible explanations. For example, regarding the finding that “top” philosophy journals that use triple blind review publish a lower proportion of female authors than journals that employ other types of journals, they say:

What then explains the low proportion of female authors in the best journals? Among the possible explanations offered as hypotheses for further investigation, the authors mention: