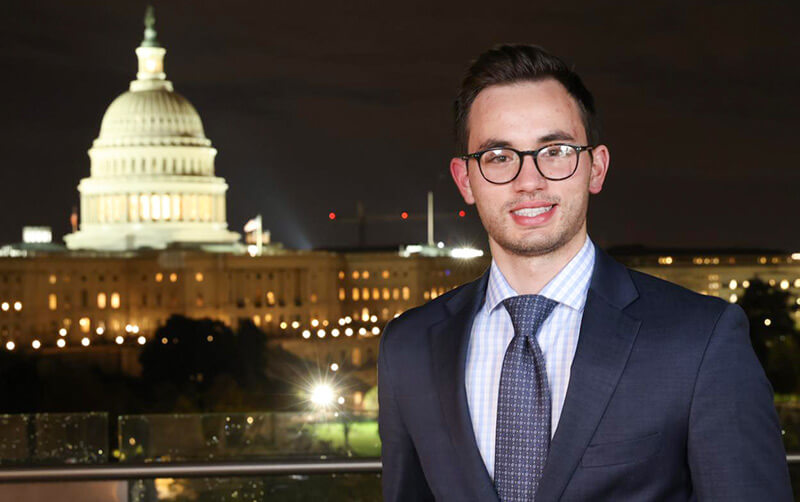 Zachary Zirzow was in his second year in high school when an accident left his father paralyzed and pushed his family into deep medical debt. The experience motivated Zirzow to pursue a career in law and politics and to advocate for more affordable healthcare.

The Cal State Fullerton major in Philosophy and Minor in Political Science was one of 26 California students to intern in Washington, DC during the fall semester as a Panetta Fellow.

“There is no safety net to ensure that ordinary citizens would not have to face bankruptcy if they have some sort of serious accident,” Zirzow said. “It got me to dive deep into the mechanisms that allow this to happen and how they can be changed.”

The Panetta Institute for Public Policy, founded in 1997 by former Defense Secretary Leon Panetta and his wife, Sylvia Panetta, offers study opportunities in the fields of government, politics and public policy. Its congressional internship program selects participants from the California State University, Dominican University of California, Saint Mary’s College of California, and University of Santa Clara system to learn the legislative process first. hand during an internship in the United States House of Representatives.

The president of each institution appoints one Panetta Fellow per year for the annual program, which begins each August with a two-week orientation at the Panetta Institute in Cal State Monterey Bay, followed by an 11-week internship in Washington, DC.

The program returned in person this year after operating entirely online in the fall of 2020 due to the COVID-19 pandemic. Zirzow interned in the office of U.S. Representative Scott Peters (D-Calif.) Who oversees the 52nd Congressional District of California, including Coronado, Poway, and northern San Diego.

Although he touched on the governance of the mock Cal State Fullerton court team, the Board of Trustees of the Student Resident Association, and the Lobby Corps Commission of Associated Students, Inc., Zirzow had always wanted to gain legislative experience in Washington, DC and learn how to influence policy on an escalator. However, he wasn’t sure he could fund it on his own.

â€œFew people, including myself, have the financial flexibility to do an unpaid internship and pay for accommodation in one of the most expensive parts of the country,â€ Zirzow said. “This opportunity to have a fully funded DC experience for three months is truly unique and hard to come by.”

As an intern, Zirzow said he helps legislative staff by acting as a liaison between voters and the office and helping with communications work such as speeches or brief summaries of bills.

“It really boosted my interest in getting into politics in Washington,” Zirzow said. “I think DC is often so mystified, as if only Ivy League graduates can step into DC politics and make a difference, but anyone can have an impact on the legislation.”

Zirzow said his philosophy classes at Cal State Fullerton, especially an introductory class he took with Philosophy Lecturer Jonathan Shoemaker, laid a solid foundation for his career in politics. Zirzow maintains a 4.0 GPA and plans to graduate next fall.