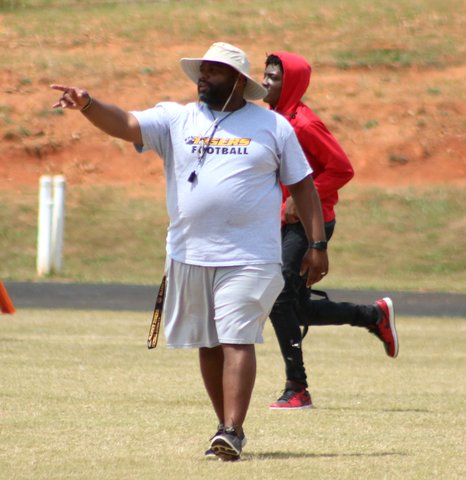 PREP FOOTBALL: Tigers ‘ready to compete’ for another regional title

COVINGTON, Ga. — First-year head coach Spencer Fortson and the Alcovy Tigers have been teeing off with spring training for the past two weeks. The team’s spring schedule concluded with an intrasquad scrimmage on Saturday.

According to Fortson, this was not a traditional spring practice for Alcovy.

“This first week [of spring practice] was more trying to see how tough the kids are, seeing some of their agility and seeing what kind of kids we have before we move forward,” Fortson said. “The second week we were more focused on trying to do some of our basic things in terms of the pattern. So they can understand some of the things we’re trying to do.

The Tigers are coming off a monumental year in 2021 by winning the program’s first-ever regional championship. But, the focus of the intra-squad scrimmage was not focused on the 2022 regular season, Fortson said.

However, it was about formulating an aggressive identity.

“We want to be competitive,” Fortson said. “We want to know who really wants to play football. We’re looking for guys to come here and compete and show us what they have in a game situation.

An added focus for the Tigers this offseason has been the hiring of Fortson, who is in his first-ever head coaching job. Fortson was previously the defensive coordinator for Crosstown rival Newton Rams.

And, while Fortson pointed out how there has been a noticeable adjustment from coordinator to head coach, he acknowledged how “excited” he and the Tigers are to see what this season has in store.

“The kids bought into what we told them and presented to them,” Fortson said. “I have a group of men around me who are locked in and understand everything we’re trying to do. We are ready to make changes here and move this agenda forward.

Now that the Tigers’ spring training is over and summer practices will begin shortly, Fortson outlined the plan for how the summer will unfold for Alcovy over the next few months.

“Our main goal is to make sure we hit the weight room, get into a strength and conditioning program, and try to get about 5-10 pounds on each player. I also want to make sure that they understand our philosophy and that they work on their techniques so that we are the best team at the start of the season. We will be able to see the product of this work and see how far our children are progressing.