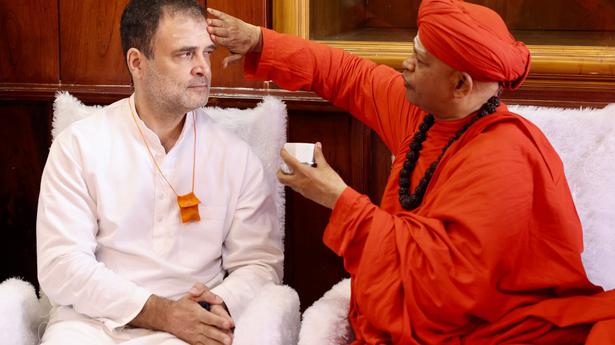 On Wednesday, Congress leader Rahul Gandhi received “Ishta Linga Deekshe” from Shivamurthy Murugha Sharana, pontiff of Murugharajendra Mutt in Chitradurga district. He is one of the main pooches in Veerashaiva-Lingayats, a powerful community widely seen as loyal to the BJP.

The seer conducted the ‘Ishta Linga Deekshe’ ceremony, which is considered an important ritual in the Lingayat sect. The seer offered Mr. Gandhi an Ishta Linga and applied vibhuti to his forehead.

Mr. Gandhi told the seer that he would worship the Ishta Linga and follow the philosophy of Basavanna. He also asked the seer to send a representative of the pooch to his home so that he could learn the rituals associated with the Ishta Linga.

Speaking to the media, Shivamurthy Sharana said Mr Gandhi was curious about the pooch’s heritage and philosophy. “As he was keen to know more about how we offer our prayers, I showed him the Ishta Linga puja (Ishta Linga worship),” he said.

“Mr. Gandhi then showed interest in having ‘Ishta Linga Deekshe’. I offered him the Ishta Linga. He happily accepted it,” the seer said. “The ceremony was not planned in advance.”

KPCC Chairman DK Shivakumar, who spoke at the meeting, said, “Mr. Gandhi did not come here to seek political support from the mutt, but to show his respect to the seer.


Interestingly, minutes before Mr Gandhi’s visit to Cabot, Shivamurthy Sharana said the country needed leaders like Prime Minister Narendra Modi. Speaking to the media, he said that under Mr Modi’s leadership, the country has come out strong in many areas.

The teachings of Guru Basavanna are eternal and I am honored to learn more about it through the Sharanaru of Mathematics. pic.twitter.com/5Dgj53roSp