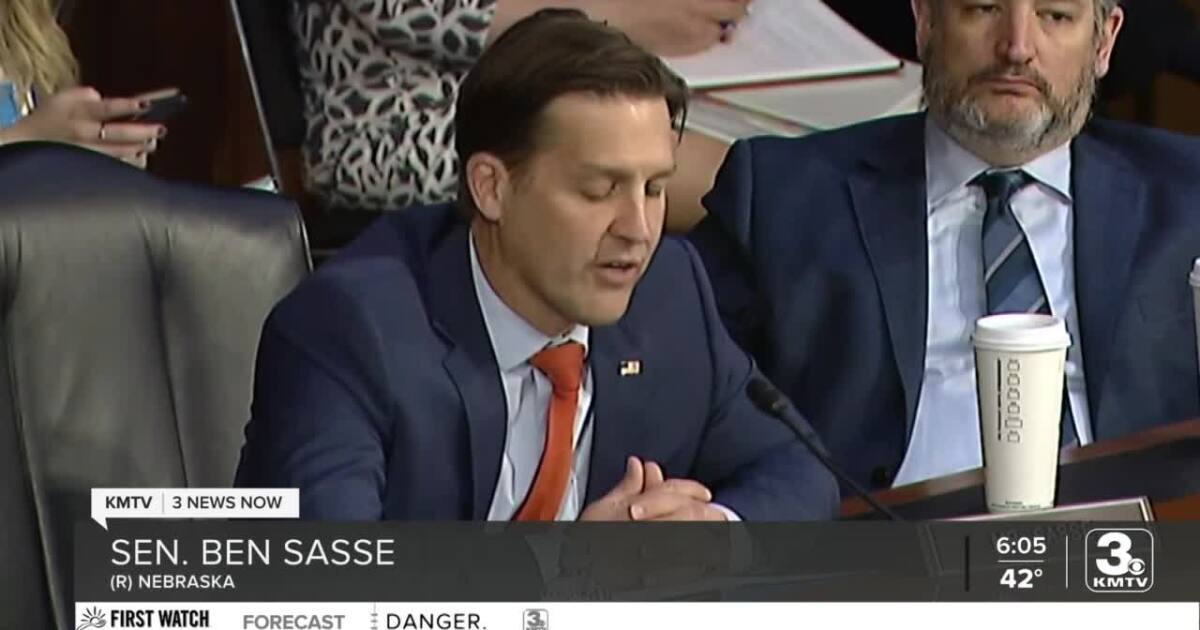 OMAHA, Neb. (KMTV) — While some Republican senators are using the hearing to ask questions about polarizing issues like critical race theory, Nebraska’s only senator on the Judiciary Committee, Sen. Ben Sasse took a different approach.

Since the Supreme Court hearing for Justice Ketanji Brown Jackson began Tuesday, some Republican senators on the committee have focused on issues that don’t appear directly related to the U.S. Supreme Court.

The treatment of prisoners at Guantanamo Bay was one topic.

“I hope they all die in jail if they come back and kill Americans,” Senator Lindsey Graham said.

“Are you comfortable with these ideas being taught to children?” Cruz asked.

“I haven’t seen any of these books, any of these ideas. They don’t come into my job as a judge,” Jackson said.

But Nebraska Sen. Ben Sasse’s attention took another direction. At one point alluding to some of the staging he thinks both sides did in those hearings.

Sasse — a former Ivy League-educated college president — isn’t afraid to be wonky. While it’s unclear if he’ll vote for Judge Jackson, he focused on his philosophy as a judge.

“This process is meant to be a careful and thorough investigation of the nominee’s record, to help the Senate make an informed decision for a lifetime appointment,” Sasse said.

Nelson, a Democrat, appreciates that Sasse approaches his job in the right way.

While in the Senate, Nelson voted for three candidates: Justices Roberts, Alito, and Sotomayor. He voted “no” to Judge Elena Kagan, but did not participate in the filibuster.

He said his goal on these votes was to ensure that a judge would not use his political preferences to change the law in any way he saw fit.

“The strike zone must be defined by law and by established law and they call balls and strikes in that zone, do not move that zone, expand it or restrict it,” Nelson said.

He thinks some senators are using these hearings to gain attention, possibly for future presidential races.

“I don’t think they think they can vote for her on the Supreme Court and get away with it without the base being very mad at them,” Nelson said.

Sasse made national headlines this week for apparently trying to find a solution in theater. His idea is to remove the cameras from the courtroom.

“I think we should recognize that part of the jackassery that we often see here is that people get mugged for short-term camera opportunities,” Sasse said.

Nelson understands where Sasse is coming from.

“I don’t think he was reckless with the way he said that,” Nelson said.

But he says you have to balance transparency by saying that citizens are using these speeches to hire or fire their lawmakers and they should be able to do that.

“When you start to limit transparency, you start to see a lot of the basis that people have to make decisions when they vote.”

Nelson also told 3 News Now that when he was in the US Senate from 2001 to 2013 the hearings weren’t as political, but thinks that changed after he left when the Senate started scrapping the rules of systematic obstruction. He wrote extensively about this in his book “The Death of the Senate”, published last year.

He pointed out that former Justice Ruth Bader Ginsburg received 96 votes in 1993, and that probably wouldn’t happen today.

“Would she be able to get more than 50 votes by a vice-presidential tiebreaker, I don’t think. »

Download our apps today for all our latest coverage.

Get the latest news and weather straight to your inbox.

2022-03-25
Previous Post: Republicans get the science behind gender difference wrong in Supreme Court nominee hearing
Next Post: Jackson on track for confirmation, but GOP votes in doubt | Region