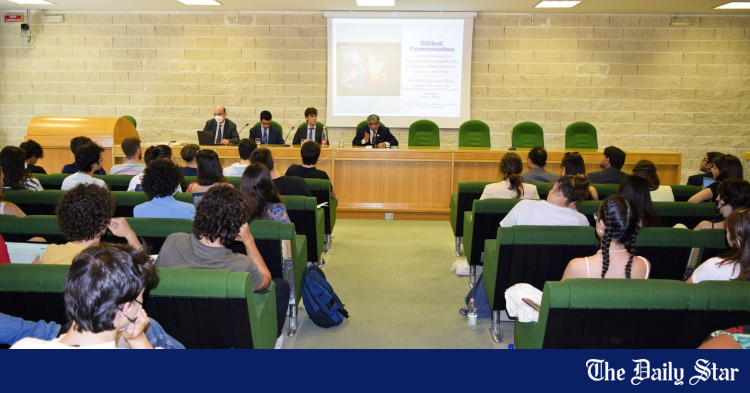 Students from the University of Rome Tor Vergata heard the story of Father of Nation Bangabandhu Sheikh Mujibur Rahman.

Bangladesh’s Ambassador to Italy, Md Shameem Ahsan presented Bangabandhu’s biography to students from different departments during a “Global Conversation” seminar held at the university auditorium on Tuesday 17 May 2022.

For all the latest news, follow the Daily Star’s Google News channel.

He also gave examples of Bangabandhu’s philosophy in front of the students and said that the path shown by the Father of the Nation contributes to the successful implementation of the current socio-economic progress of Bangladesh.

The principles demonstrated by Bangabandhu are still relevant and effective in the sector of bilateral and multilateral relations.

He also said that following Bangabandhu’s dream and vision, Bangladesh is making progress in the development sector.

During the seminar, the Ambassador answered various questions from the students about Bangladesh and Bangabandhu, the past, present and future of Bangladesh, its geopolitical strategy and its position in world politics.

A documentary on Bangladesh and Bangabandhu was also screened during the event.

The students were inspired by hearing the biography and philosophy of Bangabandhu, the liberation war and the independence of Bangladesh.

Several eminent professors from the university and senior officials from the Bangladesh Embassy were present on the occasion.