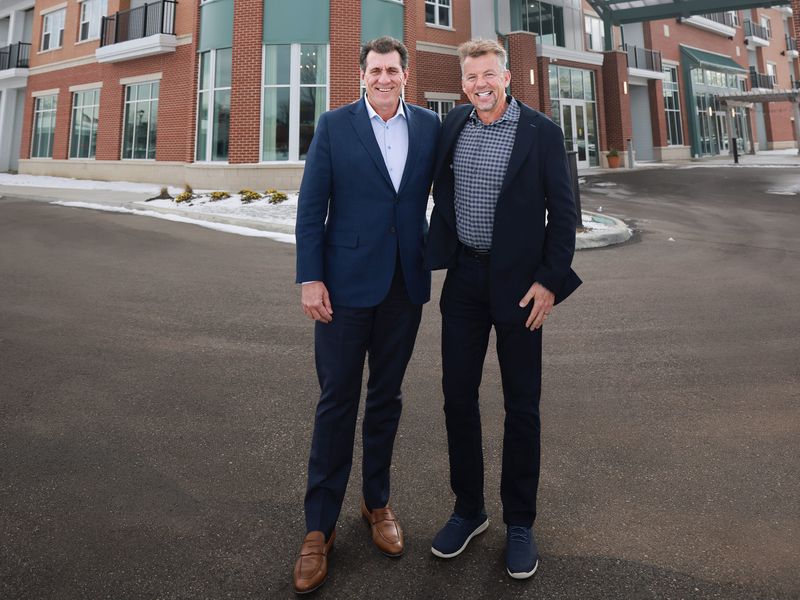 Take a look inside the area’s senior housing disruptor

Ask Pat Finley, founder and president of Vitalia Active Living, and Mario Sinicariello, its president, why they started the growing chain of age-targeted active living communities, and you’ll hear an unexpected answer.

“We felt something was missing,” Finley said, referring to how senior housing has generally been positioned. “Retirement is another part of life. What people are looking for is a carefree lifestyle. We don’t use the terms retirement community or senior residence.”

Instead, the approach is reflected in the communities’ names, as “vitalia” means “full of life,” Sinicariello said. Elements of the ethos permeate the company, which emphasizes bright designs and amenity-rich venues, each with a theater, pool, and exercise room. There is also a chef-prepared menu available daily from 7 a.m. to 7 p.m.

However, combine these elements with others in a culture of service, and the two saw a chance to become a disrupter in the space.

Whatever the foundation, the results are profound.

Starting with Vitalia’s first community four years ago in Strongsville, the group has grown to 10 locations, with eight open and two under construction. Others are in development. Their locations already form a ring around suburban Cleveland and extend as far south as Akron suburb Copley. There are nearly 1,700 units, a portfolio valued at around $500 million.

To achieve this, Vitalia raised through six funds a total of $146 million in equity from a combination of local and international investors. They calculate that the communities have a total economic impact of around $400 million per year.

Finley and Sinicariello invested heavily in the business.

“We have aligned our interests with those of our investors,” Finley said. In Finley’s case, he sold most of his portfolio of apartment and office buildings and hotels developed over a 38-year property development career.

But it wasn’t just the money.

“It’s such an entrepreneurial challenge that it had to be the only focus,” Finley said.

Finley and Sinicariello have known each other for decades. Sinicariello had a background in operating nursing homes and senior residences in Connecticut, a path he took when asked to operate his business by a banking client. Originally, when Finley was starting out as a developer, Sinicariello was a loan officer at the old National City Bank.

Their background is part of how Vitalia got so far, so fast. The major obstacle for such an undertaking is the real estate development component. Assembling sites of 5 to 15 acres requires the acquisition of several plots, often obtaining rezoning from the municipality, frequently requiring a referendum campaign. Each location is roughly a two-year effort.

However, what sets Vitalia apart, the two said, is its focus on demographics. The company employs three data analysts dedicated to vetting potential sites.

“A lot of times I’ll find a site and (analysts) tell me it’s not going to work by the numbers,” Finley said. “We have a culture where analysts can tell me where I’m wrong. We can’t make a $50 million mistake,” which refers to the estimated investment in each community.

However, Sinicariello said it was more than detailed stats.

“We put boots on the ground in every place,” Sinicariello said. “For example, the demographics might look right. But a river might bisect the market area and potential residents won’t consider it their zone.” Even so, he said, most residents come from within a five-mile radius of their chosen Vitalia location. It also reflects the preference of people over 50 to stay close to home, where they have friends and know the area.

The design and construction also reflect the philosophy.

“When we interviewed architects, we looked for ones that would add elements to a house, because that’s what we build. We didn’t want anything institutional,” Finley said. “Our goal is to make every location feel like a dream home.”

“We couldn’t grow at the rate we have if we were self-constructing,” Finley said. “There are thousands of details in construction that need to be watched. We better have contractors who have their own group of subcontractors on each project.”

However, he added, “We are watching everything, and closely.” To that end, his “home office” in Solon, as the two prefer to call their headquarters, employs around 40 people, though most are in the field. The day-to-day operation of the properties is also outsourced, through Arrowhead Senior Living, a private company based in St. Charles, Missouri.

2022-04-03
Previous Post: Mission accomplished in the Odessa region
Next Post: Reitmeyer leads the way at the West Region Invitational