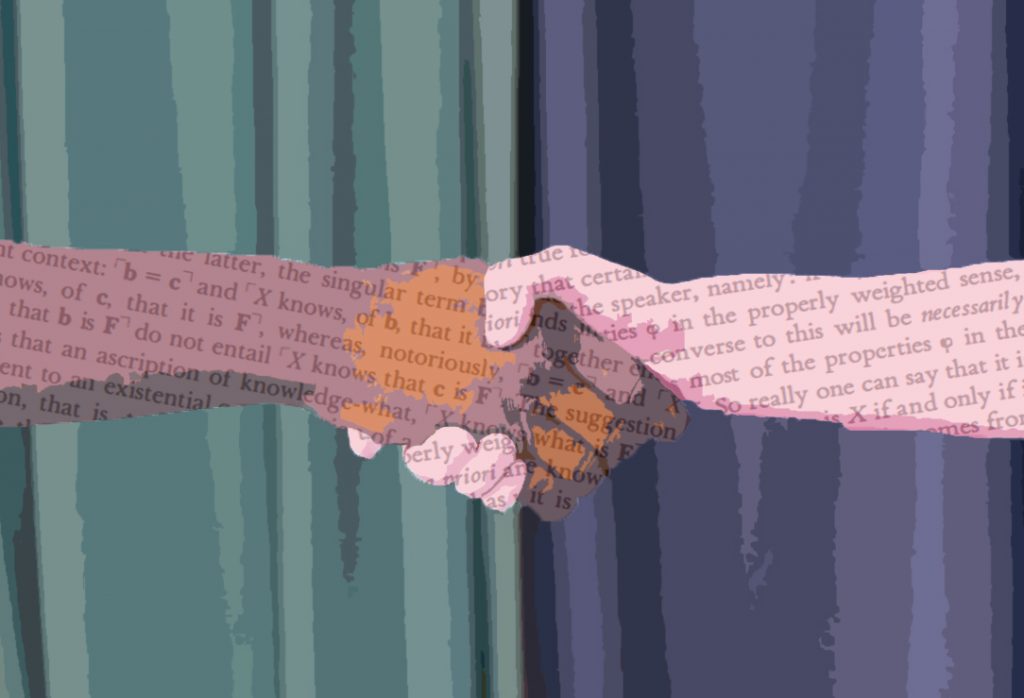 “Most contemporary philosophical writings are just bad handwriting… How did things get so bad? It’s tempting to say that philosophers are just bad writers, but I think that’s a mistake…”

The following is a guest post from Regina Rini, Associate Professor and Canada Research Chair in Philosophy of Moral and Social Cognition at York University. It is part of the series of weekly guest posts by various authors on Daily Us this summer.

The Philosophy Guild
by Regina Rini

To understand how a group thinks, pay attention to what initiates must strive to learn. For example, teach philosophy students for the first time and watch them struggle with the peculiar prose of our journals. There’s the cumbersome jargon, of course, and the gratuitously anti-mnemonic acronyms. But these vices belong to all scholarly writing. Other literary landmines are more clearly philosophical. Let x be any variable that is unnecessarily inserted into a sentence S, such that S was perfectly understandable without said insertion of x, but where a hypothetical audience A might deem S insufficiently rigorous, by A rN’s standards of rigor, if S failed to present x while A is correct under rN. We can then say that x is an overly quantified variable.

There are even more subtle quirks, ones that become invisible once you get used to them but can confuse a novice. We like to assign philosophical viewpoints to imaginary champions, dressed in definite articles and suffixes -ists (the realist, the interiorist), and seem to let them fight for our amusement. “What can the blablahist say to counter the attack of the anti-blablahist? we ask, as if we were commentators at a boxing tournament sponsored by abstracta. It seems natural enough once you’ve read it a hundred times, but the initiated reader will often assume that “the realist” is a specific, mysteriously anonymous person, like how Thomas Aquinas refers to Aristotle as “the philosopher “, or maybe a certain Voldemort. of metaethics.

Then there is signage. In this paragraph I will explain what signaling is, then I will argue that signaling is overkill, then in the next paragraph I will talk about something other than signaling. Used sparingly, it can be helpful in reminding your reader where they are in the middle of a complex argument. But contemporary newspaper articles tend to feature road signs on top of road signs on top of road signs, crowding out real arguments like Borges’ famous map the same size as the land it depicts. Besides the aesthetic atrocity that treats Montaigne’s literary form like a highway information kiosk, excessive signage actually diminishes an essay’s readability by inducing boredom and loss of focus on the central argument.

Simply put, most contemporary philosophical writing is just bad handwriting. It’s not new. Bernard Williams memorably summed up the analytical style as “mistranslated scientific reports from Martian”. In his 2009 book How do teachers think? On interdisciplinary grant review committees, sociologist Michèle Lamont calls philosophy a “problem case” among the humanities because it appears both unreadable and useless to other scholars. As Christine Korsgaard noted, in her Dewey Lecture at the Eastern APA earlier this year: “Many philosophers try to write in what you might call perfectly true sentences. A perfectly true sentence already contains all the necessary qualifications to make it perfectly true. It’s unassailable. But it is often therefore unintelligible.

It’s ironic that things got so bad, since the analytic approach was born largely to bring clarity, rigor, and prose proper to a discipline drowned in obscure idealistic verbiage. But not everyone has Bertrand Russell’s understanding of when to formally axiomatize set theory and when to simply state clearly why nuclear weapons are terrifying. A discipline where the writing of the second must imitate the conventions of the writing of the first is a discipline that hardly anyone will ever read voluntarily.

How did things get so bad? It’s tempting to say that philosophers are just bad writers, but I think that’s a mistake. Philosophers tend to be smart people, and they also tend to be readers, and smart people who read a lot usually acquire a decent facility with the powers of words. But philosophers are people who write under extreme stylistic constraints, intended not to make things easy or enjoyable for readers, but rather to satisfy journal referees’ vague and powerful sense of what looks like a work of philosophy.

This is what I call the philosophical guild system. In medieval Europe, craft guilds provided training and ensured quality, but they also protected the economic interest of their members. By restricting their profession to a limited number of people—who knew each other by special rings, handshakes, or shibboleth phrases—guilds inhibited competition and increased their own wages. More recently, anyone who finds out that their stellar medical training in Abuja is mysteriously ineligible for licensing when migrating to Arizona knows what the fuss is about.

Now philosophy isn’t as lucrative as medicine (or maybe even medieval candle making). But when there’s less to do, it’s all the more important to control who takes a bite of the cake. We’ve created politely distant metrics — resume lines, citation index scores — that varnish our hiring policies in clinical quantification. And access to publications, the currency of our realm, is still throttled by the guild’s enforcement mechanism of peer review. You better know which finger to show your variable inscription ring on, or how to do the signpost handshake, or you’ll be faced with a barred door.

In some ways, our modern guild is a welcome replacement for an older, more overt system of access control. Once upon a time, if you had a promising idea for an article, you had your secretary type it up and mail it to the editor of Disturbs, who would glance at your name on letterhead and fondly recall many hours drinking beer at Lamb and Flag with your thesis supervisor before passing your paper down the hall to a tamed proofreader. Of course, if you weren’t an old bachelor, or at least associated with one, you’d find the task much more difficult.

The rise of professional, anonymous peer review has done a lot of good, but it has also created new problems for guild enforcement. If you don’t know who wrote the article, how do you know it was written by a real philosopher? Call it the crackpot time tax; it will be familiar to any philosophy professor whose email address is publicly available. Several times a year you receive unsolicited invitations to read 147,000 words in audacious format promising to solve the problem of causal determinism by asymptotic laser refraction or to revolutionize Platonic ethics with a lost codex discovered in the toilets of Montpellier 7 -11.

There are many people without professional philosophical training who have original and convincing philosophical ideas. But it takes time to read their work and distinguish it from crazy pottery, a time that overworked journal editors and referees simply don’t have. It’s so much faster to search for secret handshakes and guild shibboleths. And that’s why we train graduate students to write like a philosopher: this is how they will prove their membership in the guild under the veil of anonymity of the newspaper.

All this has costs, of course. It makes reading philosophy often a dreadful chore, where the smallest publishable unit of an idea has been hidden in a rhetorical ravine overgrown with thorny formalization and signs pointing the way to other signs. And that means that hardly anyone reads contemporary philosophy.

What would it be like to publish philosophy outside of the guild system? For more than two years, I have written a regular column, “The Moral of History”, in the Times Literary Supplement. Once a month, I link an idea from philosophy to a news headline. It’s very hard work, with tight deadlines (often three days from conception to publication) and even stricter word limits (900 words, shorter than this blog post). But it is also extremely rewarding writing. I work with an excellent professional literary editor, Andrew Irwin, who masters my showy allusions and my defensive qualities. At a time when many public concerns – from trust in science to faith in democracy – could benefit from philosophical tools, I can at least feel like trying write for an audience beyond the guild.

Unfortunately, I don’t know how to make this scale. I’m incredibly lucky to have an editor’s advice, but there just isn’t enough for everyone. Perhaps the best we can do is exert internal pressure to trade our guild signifiers for something better. Rather than expecting philosophy papers to be armored in unnecessary formalization, we might demand lively prose and judicious examples. I don’t have room here for a whole theory on how to balance philosophical rigor and accessible writing. What I mean is that our current guild standards discourage us from even trying.

What we need is a cultural change, a redefinition of expectations. I am encouraged by the growing interest in public philosophy, especially initiatives aimed at training philosophers to communicate ideas, such as the Sanders Foundation’s Philosophy in the Media program led by Barry Lam. My hope is that as more and more philosophers gain experience writing for a general audience, their academic work will also begin to show literary virtues. A guild is only what its members make of it. And a guild that does not change, like medieval candle makers, is doomed to terminal insignificance.