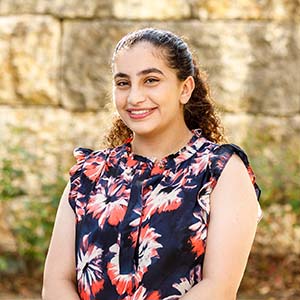 Raised in an Egyptian Christian family, Tiffany Nakla ’22 grew up attending a Coptic Orthodox church where the beautiful prayers and hymns sung in Arabic and Coptic during services moved her deeply and inspired her faith. Moving on to college, Nakla enrolled in Azusa Pacific University where her faith continued to flourish.

A love of scholarly learning, especially science, inspired Nakla’s decision to study biology and the humanities. “Honors College is one of the main reasons I chose APU,” she said. “It’s such a unique aspect of APU education. You really can’t find anything like it at most other undergraduate universities. It gave me a way to explore ethics and philosophy in a particular way with Socratic-style discussions. A double major in the humanities also meant that Nakla was not required to take general education courses, allowing her to focus more intensely on her science courses. After her second year, Nakla decided to switch from biology to biochemistry. I’m really glad I made the switch because I got involved in some really cool projects and learned a lot.

After reflecting on her four years at APU, Nakla said her favorite class was regional human anatomy. “In the cadaver lab, you can connect with what you learn in class. Most undergraduate universities don’t have cadaver labs, so this was an unprecedented opportunity,” he said. She said Analyzing the interactions between the different systems of the human body, from muscular systems to skeletal and organ systems, led Nakla to realize something essential.

“Science and faith naturally overlap, but I think most of the time scientists and Christians struggle to put the two together,” she said. “There is a level of delicacy and complexity in the human body that you just can’t get from natural selection or evolution. Learning these things in anatomy, biochemistry, cell biology, and microbiology ultimately improved my understanding and knowledge of God.

At APU, Nakla was able to participate in research projects as an undergraduate student, a rare opportunity for a science student before graduate school. “The purpose of research is not to get an A; it’s more about learning how you can deepen your own knowledge in niche research areas,” she said. “My Principal Investigator (PI), Kevin Huang, PhD., helped me write a grant proposal, which requires a lot of writing skills that you don’t learn in class. We investigated the potential anti-cancer qualities of spirocyclic molecules. That’s one of the real benefits of research, learning more about these complex scientific ideas and explaining them in a way that anyone can understand.

Nakla, who graduated in May, plans to attend Touro University in Nevada for osteopathic medicine. “The DO program is similar to its MD counterpart, and you get the same licenses and certifications as a doctor, but the emphasis is on holistic care. You view a patient as a whole person, taking into account the intrinsic and extrinsic factors that influence their symptoms and daily life,” she said. Nakla is unsure if she will stay in Nevada, return to Southern California or move to a new location after graduating from medical school. However, she is sure that she will be prepared for what the future holds. “I have made many lasting connections at APU, with peers and faculty who continue to support me and care about my well-being, mentally, emotionally and spiritually. I received a lot of compassion and I want to pass it on because it is very necessary in today’s world.