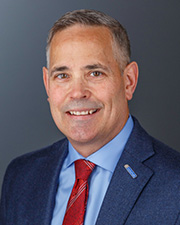 This line from Captain Kirk’s opening monologue in the original “Star Trek” series lasts for more than 55 years since it first aired. It’s also the title of a new book that examines leadership through the lens of science fiction.

â€œIf you are going to lead, you are going boldly. Not only is this the impetus behind this book, but it is also my personal philosophy of leadership in general that you must be willing to take risks to create opportunities for yourself.

Leonard is co-editor of “To Boldly Go: Leadership, Strategy, and Conflict in the 21st Century and Beyond”. Its collection recruits 30 writers – strategy experts, senior policy advisers, professional educators, experienced storytellers, and field-level military commanders – to produce essays exploring this topic. It is published by Casemate.

â€œCaptain Kirk was the prototype leader that I grew up with that embodies the idea of â€‹â€‹’there is your ship captain’,â€ said Leonard, senior researcher at the Modern War Institute at West Point. “He is daring, he is daring, he always leads from the front and always by intuition.”

The retired Colonel wanted to put together something that met this level of leadership, but had broader appeal than a simple project aimed at “Star Wars” aficionados or business management enthusiasts. Here you will find topics that can be enjoyed by readers of Isaac Asimov and Peter Drucker.

Leonard himself writes three of the 35 chapters, including one in partnership with co-editor Jonathan Klug who dissects the Battle of the Mutara Nebula.

â€œThis is the centerpiece of the conflict between intelligence and experience,â€ he said of the climactic clash found in â€œStar Trek II: The Wrath of Khanâ€. “Intelligence without experience is wonderful, but it is experience that wins these fights, and that plays out with Kirk and Khan.”

Another of its chapters focuses on the 1968 film “Planet of the Apes”.

“I was just going to write about how it was a contemplation of that late ’60s era. But rather it turned into a reflection of class society of how screenwriter Rod Serling incorporated his own personal life experiences in the film’s script while growing up in the face of anti-Semitism, â€he said.

The book has contributors who represent some of the best writers in the genre.

Best-selling author Max Brooks (“World War Z”) composes “Romulans and Remans,” a futuristic examination of desegregation that uses the Romulan War as a metaphor for the return of the Tuskegee airmen to their homes.

Leonard also cites the chapter “Space Battleship Yamato and the Burden of Command” by August Cole (“Ghost Fleet”) as an example of a more obscure sci-fi property that generates provocative material.

â€œAugust has a beautifully written chapter that deals with what happens when you’re on an impossible mission, you have the unlikely crew and things are against you. How do you put all of that together to find success?â€ He said.

Craig and Steve Whiteside tap into the cultural zeitgeist with a chapter about “The Stand” by Stephen King.

“It is examining the emergence of a pandemic, which could not be more timely,” Leonard said. â€œThere was no intention to produce an article on how to get through COVID-19 because we started this project before the pandemic. But it becomes a perfect chapter which is especially relevant now that the Delta variant is gaining a foothold. “

Leonard is not the only contributor to KU. Kelsey Cipolla, Communications Coordinator at the School of Business, provides insight into the challenges facing women in positions of power by analyzing the divergent views of Vice Admiral Holdo and Poe Dameron from “Star Wars: The Last Jedi “.

Now in his seventh year at KU, Leonard has provided chapters to the books “Strategy Strikes Back: How ‘Star Wars’ Explains Modern Military Conflict” (Potomac Books, 2018) and “Winning Westeros: How ‘Game of Thrones’ Explains Modern Military Conflit “(Potomac Books, 2019). He is co-editor of” Why We Write: Craft Essays on Writing War “(Middle West Press, 2019). He is also the creative force behind the subversive web comic” Doctrine Man !! “and its four collected volumes.

â€œ’To Boldly Go’ sums up things I had worked on in previous anthologies. We had more science fiction to draw from, not just â€œStar Warsâ€ or â€œGame of Thronesâ€. We could open wide the opening and then bring in more people with more diverse backgrounds for a better and more complete perspective, â€he said.

As Australian Army Major General Mick Ryan describes in the book’s foreword, “Science fiction provides a telescope into the future, a mechanism for thinking about future challenges.”

Leonard said, â€œThere’s a series of posts here that allow us to use science fiction in a way that we talk about really important and topical topics. We see the role of leadership in times of crisis – and it is a time of crisis. “

2021-09-30
Previous Post: The “practical inertia” of racism in philosophy
Next Post: Hopi archaeologist reflects on discipline: Science Moab speaks with Lyle Balenquah on Indigenous perspectives on archeology | Go out and go