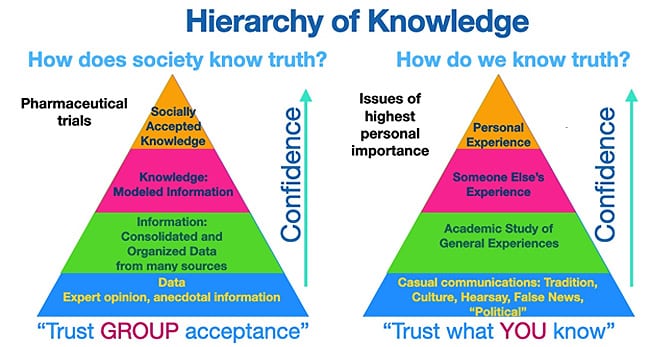 Understanding confidence and uncertainty in religion and in science… Can we explore the truth of faith and the truth of science in the same way?

The Los Alamos Faith and Science Forum presents: Understanding Trust and Uncertainty in Religion and Science… Can we explore Faith Truth and Truth Science in the same way? By Gary Stradling, Ph.D.

The community is invited to join the conference in person on Wednesday, July 13 at Kelly Hall at 3900 Trinity Dr. or via Zoom at https://tinyurl.com/GodCosmos.

Science is discussed in experiential/quantitative terms that can be shared with others: observation, measurement, analysis, modelling. Faith is often discussed in qualitative terms: mystical, philosophical, emotional.

Both science and religion are about knowledge, truth, trust and understanding. We grasp an understanding of their reality and relevance through observation, experience, exploration and experimentation, cogitation, discussion, model building.

Dr. Stradling is a 5th generation New Mexican, born in Albuquerque, raised in Belen and throughout the Midwest. He holds BS and MS in Physics from BYU-Provo, and MS and PhD from University of California Davis/LLNL in Applied Science Physics.

He worked at Lawrence Livermore Laboratory from 1977 to 1981 and as a staff member at Los Alamos National Laboratory from 1981 to 2012. He led the Office of Treaty Verification Technologies at the Defense Threat Reduction Agency in DC from 2012 to 2017. He has been retired since 2018, is the 1st Vice President of the Los Alamos County Republican Party, and is running for County Council.

Sradling was chairman of the 26-nation Open Skies Sensor Task Force in Vienna, Austria, from 1994 to 1997, and successfully brought this international treaty into force. He served as Science Advisor to the Department of Defense to three deputy-level offices of the Pentagon Assistant Secretary of Defense: Arms Control, Implementation, and Compliance; counter-proliferation; and Nuclear and Missile Defense Policy from 1994 to 2000. He received the Hubert Schardin Gold Medal from the German Physical Society for his work on high-speed X-ray photography. He led the Los Alamos team that enabled Angel Fire’s wide area tactical surveillance capability to be deployed to Iraq in support of the United States Marine Corps.

Stradling was active in The Church of Jesus Christ of Latter-day Saints (LDS) his entire life. He attended LDS seminary from 1965 to 1969. He served a Cantonese-speaking mission in Hong Kong from 1971 to 1973 and held many church responsibilities over the years. He is an avid student of the scriptures. He is on staff at the LDS Albuquerque Temple on a weekly mission.