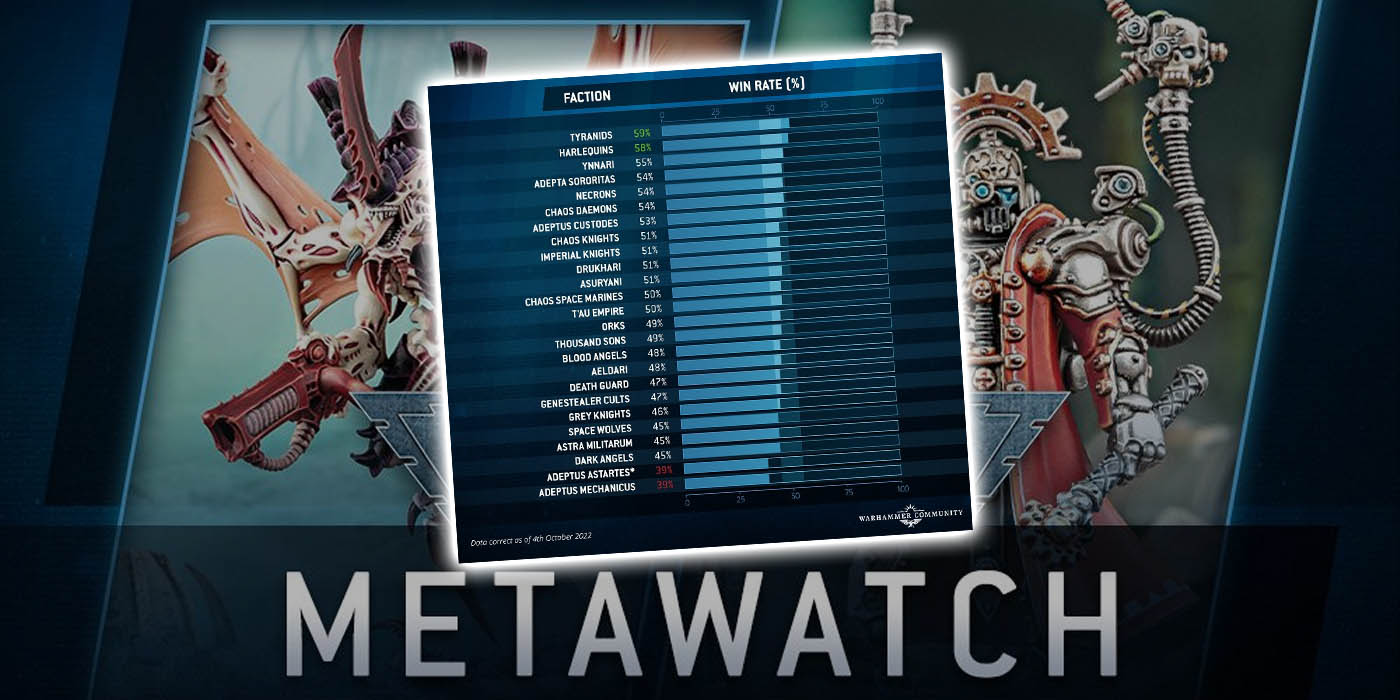 Games Workshop opens the curtain to talk about the balance philosophy of Warhammer 40k and how they use win rate data.

Warhammer 40,000 is a complicated game, and trying to balance it is even more complex. There are a lot of moving parts and variables to consider and adjust. So when you’re trying to figure out something to measure each army, you only have a handful of things you can compare equally. One of these options is win rate data.

Today, Games Workshop is covering the latest Metawatch win rate data and also explaining the balance philosophy behind the army updates and changes.

via the Warhammer community

When evaluating balance, we use an army Success rate as a key metric – which, just as it seems, is how many of their games they win. If an army has played 100 games and won 50, it will have a 50% win rate. That would be great – optimal in fact. In an ideal world, each army would have a victory rate of exactly 50%, but ideal worlds don’t exist in the dark shadows of the far future (where they’re mostly on fire or overrun by monsters).

Therefore, we allow ourselves a 5% margin of error in the data we collect, and aim for each army to have win rates between 45% and 55% – if higher, it suggests that the faction is outperforming their rivals, and if it’s lower, it suggests they’re struggling to keep up.

It’s important to know that success rate is the cornerstone of GW balancing attempts. They also represent a 5% margin of error. Ideally, they’d like every army to be 50% right – but with that margin of error, they’re fine with armies between 45% and 55%. So how do all the armies stack up?

This data is based on over 100,000 games played with the War Zone Nephilim Mission Pack between June and October 2022. As you can see from the graph above, the majority of armies fall within this “sweet spot” range. from 45% to 55%. There are a few outliers and GW addresses them in their article.

On the low end

Get Tabletop, RPG and Pop Culture news straight to your inbox.

This reasoning makes sense. But what about the Adeptus Mechanicus? There isn’t really a reason given by GW. They will therefore continue to monitor their results. Personally, I think a lot of this is due to the learning curve of this particular army. I’m not sure how many games have been played with it or if players “stick to it” long enough to really master it.

At the top of the spectrum we have the Tyranids with a 59% win rate and the Harlequins following close behind with a 58% win rate. GW doesn’t go into great detail in the article on these two armies specifically, but if you’ve played with or against these armies, you have a good idea why they’re winning at these rates.

The Tyranids are in a very strong position with their current codex. We won’t go into all the factors but they generally have the ability to play in all phases, have good management of objectives/secondary objectives/board positions, can be super versatile/adaptable for different missions, and have a nice army/rules synergy to go with it.

Harlequins are also an army that appear on the scene due to their high damage output, speed, and internal synergies. They’re not as popular in an army, but they’ve also seen a big increase in kills over the time period of this data collection. This may have skewed some of their numbers accordingly.

The last major topic we’re going to cover is Warhammer Studio’s philosophy of balance. We’ve already covered win rates, which is a good metric. There are two quotes we are going to look at to discuss this.

“Warhammer Studio takes matched play seriously. It is not only the setting for thousands of games played at competitive events throughout the year, it also forms the common language of more casual games played at kitchen tables, in gaming clubs and in stores around the world. A balanced game is good for everyone.

I think that’s a really good philosophy to have on the game as a whole. Matched Play dictates the framework of the overall game – even if you’re not a competitive gamer, Matched Play still impacts your games. It is this “common language” for all other types of games that can be played. A balanced game is good for everyone.

The second quote is also a good insight into GW’s balance philosophy:

“As such, there should never be a ‘best’ army – every army should be the best at do the thing he’s supposed to be best at. This is ideal, both from a narrative and competitive point of view.

Each army being the “best at doing what it’s supposed to be best at” is another good goal. But inside of that, there’s only so much in the game to be the best. So there are bound to be overlaps. That said, it’s still an interesting insight into some of their end goals and game design/philosophy.

If you have some time, check out the video as it’s a deeper dive into this Games Workshop discussion.

What do you think of GW’s balance philosophy and the use of winrate data to help guide the game?

A writer, editor, Texas Native, and Austinite for over 15 years, Adam covers all things tabletop gaming. Which includes Warhammer 40,000, Age of Sigmar, D&D, Board Games and anything involving dice, boards, cards and table. A fan, gamer, and collector of miniatures and games, Adam’s current obsession are his armies of death for Age of Sigmar, his Blood Angels and Tyranids for 40k, and his ever-growing Arkham Horror: The Card Game Collection.