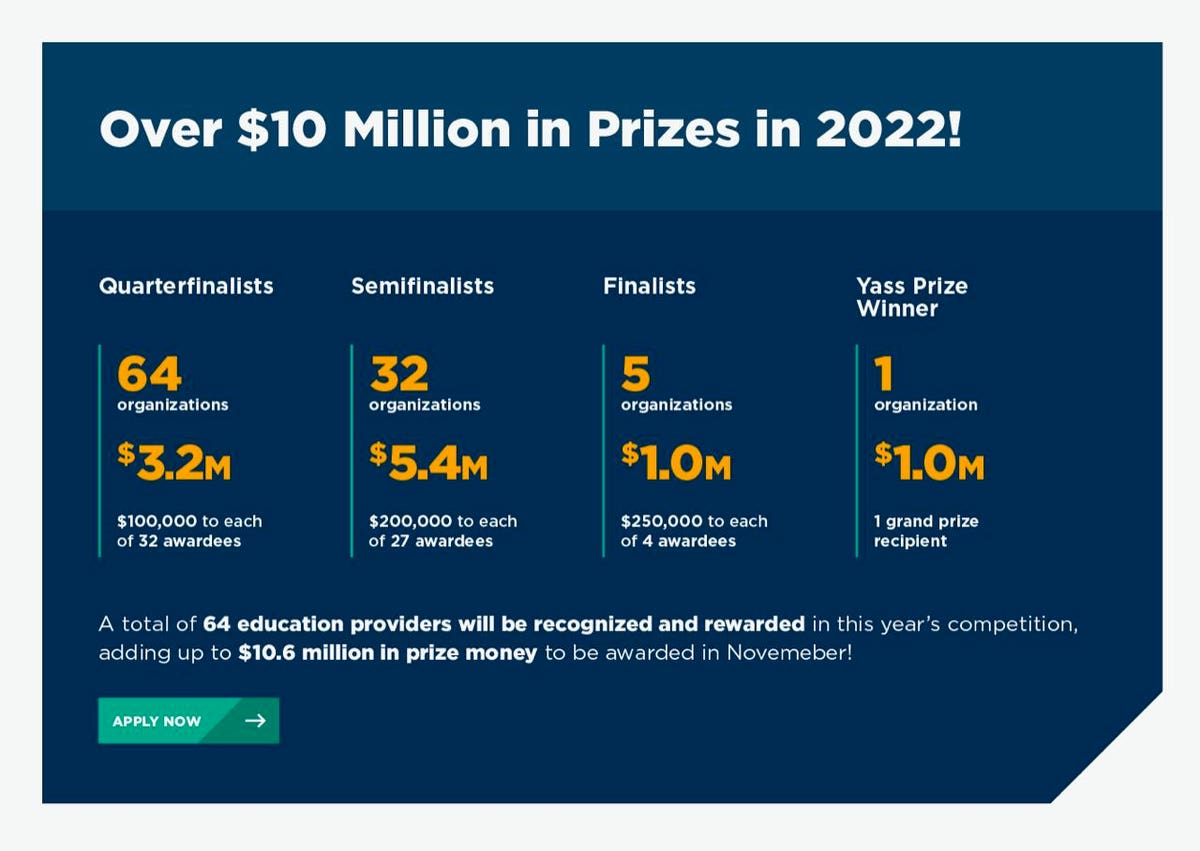 Why this philanthropist decided to radically change his philosophy of giving

How an emergency grant became an annual award, leading to a foundation that sparked a movement.

In August 2021, as Covid continued to assault all of our lifestyles, the word ‘hero’ became inextricably linked with ‘healthcare worker’. And make no mistake: everyone from doctors and nurses to physician assistants and therapists deserved our undying gratitude.

At the same time, no one was really talking about the heroes of education — teachers who have continued to work with children despite the most trying circumstances of our lives. Didn’t these beacons of resilience also deserve a prize?

My husband, Jeff, and I posed this question to our longtime friend Jeanne Allen, CEO of the Center for Education Reform. They absolutely do, she said — and so we got to work.

In my state of Philadelphia, when the schools closed, we provided laptops to kids who didn’t have them at home. It seemed like a quick and easy victory. However, when some schools reopened, the reality was depressing: technology was replacing learning.

At the same time, thanks to the publicity surrounding these donations, we began to hear of parents from underserved communities who were not waiting for charity but taking matters into their own hands. Perhaps the best example is the Black Mothers Forum in Arizona. These mothers formed learning modules, but they lacked money for necessities such as heating.

It was a need we could fill, so we created a grant for 60 children to learn in a safe environment.

In addition, our seed capital inspired the state to support the program. Indeed, Governor Ducey signed legislation that created the equivalent of education savings accounts, which paid for the cost of the program.

Our success in the Southwest got us thinking: Why limit these opportunities to Arizona? Children and parents shouldn’t have to beg for money to learn.

In other words: without a doubt, there were many more groups like the Black Mothers Forum across the country. How could we discover their achievements?

In Forbes, we found a media partner who helped spread the word everywhere. Within months, thousands of applications poured in. Our sadness turned to joy when we saw how many organizations were doing such spirited and prodigious work.

Indeed, while reviewing the applications, we came across one that positively blew us away. In Springfield, Missouri, a museum had been turned into a school. Within five days, children whose buildings had suddenly been closed could now continue learning.

Equally important: since many of their parents were economically insecure first responders, the school – the Discovery Center – provided free childcare and meals. As a result, 1,500 students were able to continue their studies at the height of the pandemic.

This is the essence of what we call a “STOP” education:

The work must be sustainable over time, meaning it can be funded independently without ongoing philanthropy.

The effort must be transformationalmeaning it uses innovative new approaches to change the way students are educated.

Programs should be exceptionalwhich means they are obviously successful on all levels.

And the work must not require any authorization — it must be without authorization – which means it is free to exist and thrive without being dependent on regulatory bodies.

This last point — about permission — is particularly important. Over the past quarter century, I’ve helped families in inner cities unlock educational options. In doing so, I learned many lessons. For example, trying to get charter applications approved is too difficult. Trying to get state scholarships approved – more or less the same thing. Creating more opportunities for students shouldn’t be such a daunting task. That’s why we’re building a movement, not just to reward STOP educators who don’t take ‘no’ for an answer, but who are committed to truly transforming education for all students, and the policies that currently prevent that from happening. occur.

As the Discovery Center discovered, “If you build it, they will come.” This go-getter attitude was key not just during Covid, when no one knew what was happening next; it also describes the mindset of every innovator in history.

It’s impossible that success stories like these won’t inspire you. Indeed, Jeff and I were so moved that we decided to turn an emergency grant into an annual award, housed in the new STOP 4 Education Foundation.

We are also tripling the size and scope of the STOP Awards: instead of giving $3 million to 20 recipients, we are now giving $10.6 million to 64 recipients, each receiving at least $100,000. And we’ve named the $1 million grand prize the Yass Prize, which we hope will become the educational equivalent of the Pulitzer.

Finally, the STOP Awards bring together all the semi-finalists for a month of business accelerator. Last year’s Accelerator proved that the experience of learning and partnering with entrepreneurs, mentors, and most importantly, each other was even richer than the financial rewards. No doubt these feelings will be reinforced, since this year we are doubling the number of participants (to 32!).

Where are things now? On April 20, we launched the 2022 STOP Awards. If you are a public or private school, an extracurricular activity provider or a microschool, a mom who trains a learning module or a software engineer who develops an application, we want to hear from you. We want to tell members of Congress that there is an education provider offering a STOP experience in their state or district.

Applications are due July 15. We look forward to reading yours.